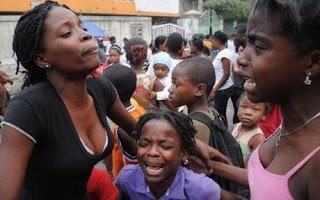 When will the most vulnerable people in Haiti get a break from the natural and man-made disasters that have afflicted then in the past few years? First the earthquake, then the cholera outbreak and now news of widespread sexual violence against women. The government of Haiti and the international community must work together to address this blight. The long-suffering mothers and daughters of Haiti can do without this additional pain!
Read the Amnesty International’s Report
Haiti: Sexual violence against women increasing
Amnesty International, 6 January 2011
Women and girls living in Haiti’s makeshift camps face an increasing risk of rape and sexual violence, Amnesty International said in a new report released today.
One year after the earthquake which killed 230,000 people and injured 300,000, more than one million people still live in appalling conditions in tent cities in the capital Port-au-Prince and in the south of Haiti, where women are at serious risk of sexual attacks. Those responsible are predominately armed men who roam the camps after dark.
More than 250 cases of rape in several camps were reported in the first 150 days after January’s earthquake, according to data cited in the Amnesty International report,Aftershocks: Women speak out against sexual violence in Haiti’s camps.
One year on, rape survivors continue to arrive at the office of a local women’s support group almost every other day.
“Women, already struggling to come to terms with losing their loved ones, homes and livelihoods in the earthquake, now face the additional trauma of living under the constant threat of sexual attack,” said Gerardo Ducos, Amnesty International’s Haiti researcher.
“For the prevalence of sexual violence to end, the incoming government must ensure that the protection of women and girls in the camps is a priority. This has so far been largely ignored in the response to the wider humanitarian crisis.”
Sexual violence was widespread in Haiti before January 2010 but this has been exacerbated by the conditions since the earthquake. The limited assistance the authorities previously provided has been undermined by the destruction of police stations and court houses. This has made it more difficult to report sexual violence.
Over 50 survivors of sexual violence shared their experiences with Amnesty International for the study.
One 14 year old girl, Machou, lives in a makeshift camp for displaced people in Carrefour Feuilles, south-west Port-au-Prince. She was raped in March when she went to the toilet.
“A boy came in after me and opened the door. He gagged me with his hand and did what he wanted to do. He hit me. He punched me. I didn’t go to the police because I don’t know the boy, it wouldn’t help. I feel really sad all the time. I’m afraid it will happen again,” Machou told Amnesty International.
One woman, Suzie, recounted how she was living in a makeshift shelter with her two sons and a friend when they were attacked around 1am on 8 May. Suzie and her friend were both blindfolded and raped in front of their children by a gang of men who forced their way into their shelter.
“After they left I didn’t do anything. I didn’t have any reaction. Women victims of rape should go to hospital but I didn’t because I didn’t have any money. I don’t know where there is a clinic offering treatment for victims of violence,” Suzie said.
Suzie lost her parents, brothers and husband in the January earthquake. Her home was also destroyed.
Amnesty International’s report highlights how the lack of security and policing in and around the camps is a major factor for the increase in attacks over the past year.
The response by police officers to survivors of rape is described as inadequate. Many survivors of rape recollected how when they sought police help they were told officers could do nothing.
“There has been a complete breakdown in Haiti’s already fragile law and order system since the earthquake with women living in insecure overcrowded camps.” said Gerardo Ducos.
“There is no security for the women and girls in the camps. They feel abandoned and vulnerable to being attacked. Armed gangs attack at will; safe in the knowledge that there is still little prospect that they will be brought to justice.”
Amnesty International is calling for the new government to urgently take steps to end violence against women as part of a wider plan to address the humanitarian effort. The report states that women in the camps must be fully involved in developing any such plan.
Immediate steps include improving security in the camps and to ensure police are able to respond effectively and that those responsible are prosecuted.