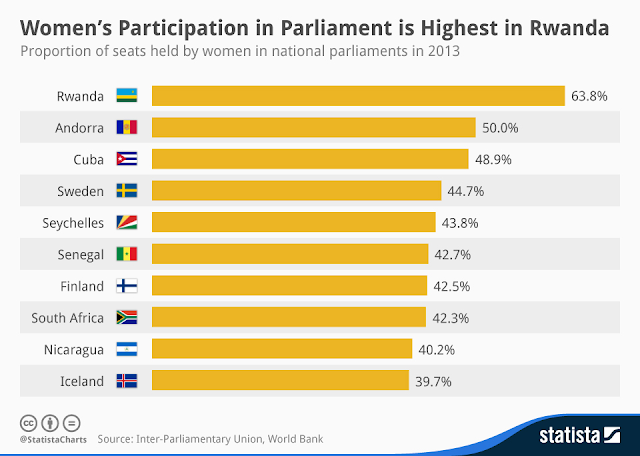 In the World Economic Forum’s Global Gender Gap Report for 2015, an annual ranking of the world’s most equal countries for men and women, the small African country, Rwanda, ranked 6th globally, ahead of the United states, Switzerland, the United Kingdom, Germany and Denmark.

Rwanda has been described as “the best place to be a women in Africa.” Women constitute 63 percent of the membership of the Rwandan parliament. That means that there are more women than men involved in the legislative process. I would add that it is one of the best places to be a woman anywhere in the world.

How did Rwanda manage to rank so highly? After the horrific genocide of 1999 that devastated and traumatized the country, the Rwandan government put in place a comprehensive set of laws to promote women’s participation in the political, social and economic life of the country. This was seen as critical to the process of national reconstruction and healing. The laws enacted have facilitated women’s participation in local politics, given women the right to inherit land, share the assets of a marriage and obtain credit. As many girls as boys receive primary and secondary education, maternal mortality is lower and the birth rate is falling.

This achievement is the result of a comprehensive program of national reconciliation and re-integration put in place after the genocide. It included the establishment of a National Unity and Reconciliation Commission whose mandate is to “organize national public debates aimed at promoting reconciliation, foster tolerance and a culture of peace and human rights, and denounce any ideas aimed at disunity.”

The Commission is also tasked with educating Rwandese on their rights and the rights of others, draft laws to foster reconciliation and monitor whether authorities and the people in general “respect and observe the policy of national unity and reconciliation.” While not all the lofty goals of national reconciliation and human rights protection have been achieved, Rwanda has made significant progress in the key area of empowering its women and girl-children.

The simple lesson here is that empowering women and protecting women’s rights is a matter of commitment and political will, more than anything else. Where there is political will, the familiar arguments of resource limitation and cultural tradition often used as excuse to resist changes aimed at empowering women can be surmounted. That Rwanda, a resource limited and traditionally conservative society, has managed to uplift its women to unprecedented levels, only two decades after genocide, is a valuable lesson for the rest of the world.