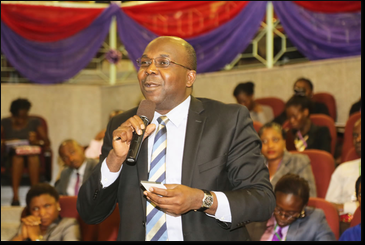 Keynote talk at the 2016 Covenant University-International Conference on African Development Issues (CU-ICADI) held at the African Leadership Development Centre on the university campus at Ota, Nigeria.

Africa would not be said to have developed if the indices of development do not reflect a positive change in the life of the ordinary people, a Professor of Global Human Rights and Peace Studies at McMaster University, Canada, Professor Bonny Ibhawoh, has said.
He made this assertion while discussing the speech of the Keynote Speaker, Professor Joy Ogwu, on the opening day of the 2016 Covenant University-International Conference on African Development Issues (CU-ICADI) held at the African Leadership Development Centre on the university campus at Ota, Ogun State.

Ibhawoh, who highlighted the key points raised by Ogwu as Collective Responsibility, Sustainable Development, Continuity in Government, Corruption, Nexus between Security and Development and Inclusive Development, said “the fundamental definition of development is the objective improvement on the life of the ordinary people. Until the kind of growth we see in this country (and Africa) reflects the definition of development I think things will continue to remain the same”.

Acknowledging that, by all measurable standards the Nigerian economy has grown in the past few years and even surpassed that of South Africa as the largest economy in Africa, Ibhawoh, who is also Associate Vice-President (Research) at McMaster University, emphasized on sustainable development.

The key question to ask, according to him, is how far does development brings succour to the ordinary people. “Until we can answer that question in the affirmative, I think all this talk about inclusivity is a ruse, and this is buttressed by what the former President of Tanzania, Julius Nyerere, said, that the African poor cannot eat the GDP (Gross Domestic Product),” he said.

In collective responsibility, he averred, lies the prosperity of Nigeria and indeed all African countries, while echoing Ogwu’s assertion that African people must fashion out indigenous and organic responses to the challenge of development in Africa.

“When I came into the campus, I was told that earlier in the day (Sunday) some 50 to 60, 000 people had been on this campus for a church service, and I wondered how come it is so calm, so clean there is no garbage in the streets, everything has been taken care of. I was told that much of the cleaning of this campus is done by the people themselves, people who clean and tidy up because they share a sense of collective responsibility.

On continuity in government, Ibhawoh said it is crucial to national development as African nations cannot continue to take one step forward and three steps backward, adding that one cannot build a scaffold on the foundation of discontinuity.

“There has to be parameters for progress,” he said. “The concept of prebendalism is the most analytical attempt to dissect the endemic problem of corruption in Africa. The same Nigerian that embezzles states funds wouldn’t do that as secretary of a community association; those funds are considered sacred.

“We talk about government building roads, building bridges, whereas the emphasis in the United States is on tax payers building infrastructures, it is about people having responsibility in their own governance.”

Ibhawoh, who expressed concern that African nations do not pay enough attention to security, stressed the need for countries to give priority to security on their development agenda since there is a nexus between development and security.

McMaster University, he revealed, has a Centre for Peace and Conflict Studies and what the Centre does is to proactively think about building peace in the society, such that even before conflicts erupt there are measures put in place to arrest potential conflicts.

He said: “In our country (Nigeria), it seems just as we are dealing with one conflict another one erupts; the Niger Delta militants, Boko Haram or farmers and herders. My thinking is that rather than respond to these security issues when they erupt, why don’t we create a body that acts proactively, a gathering of lawyers, scientists, thinking about peace retention, and peace resolution.

“In South Africa at the end of apartheid, one of the things former President Nelson Mandela got right is that he put in place the Truth and Reconciliation Commission because he realized that unless the conflicts caused by apartheid are dealt with in a peaceful manner the country won’t move forward.”

Speaking on the issue of gender equality and inclusive development, Ibhawoh urged African nations to involve women in governance, politics and business because in the words of Nyerere, “No person can run on one foot”.

“In Rwanda, 60 per cent of the Rwanda legislatures are women. Rwanda ranks higher than the United States, higher than Denmark, higher than Canada in women participation in the legislature, which is what I call progress,” he said.

Ibhawoh, in conclusion, reiterated that “nobody can write our script for us, we Africans must find solutions to our challenges”.

Letter to a Christian friend on the subject of Gay Marriage