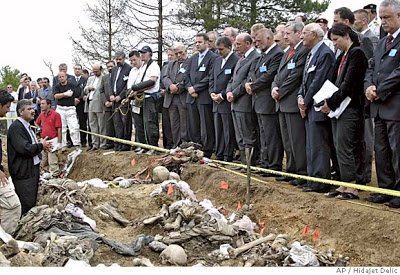 Too little, too late?
– Is this really about contrition for the atrocities of Srebrenica or more about Serbia’s quest to join the European Union?
– Has this apology come at this time only to prepare the way for Serbia’s joining the Union?
– Why the reluctance to use the term “Genocide”? Who is afraid of the term “Genocide?”

However, I think this is a first step in the right direction. The true measure of the apology will be how it shapes Serbian government’s relations with its neighbors and Muslim minorities. This apology should be a means to an end rather than an end in itself.

Serbia’s parliament has passed a landmark resolution apologising for the 1995 Srebrenica massacre – Europe’s worst atrocity since World War II. The motion, approved by a narrow majority, says Serbia should have done more to prevent the tragedy.

It stopped short of calling the Bosnian war killings a genocide.

The murder of nearly 8,000 Bosniaks (Bosnian Muslims) was carried out by Bosnian Serb forces – allies of then-Serbian President Slobodan Milosevic. The massacre, in what was supposed to have been a UN safe haven, became a symbol for the atrocities of the Balkan wars.

Meanwhile, a Dutch court has rejected an attempt to hold the United Nations responsible for the killings.

The resolution – which the Serbian government sees as a crucial step in its attempts to join the European Union – was approved after almost 13 hours of heated negotiations in the Belgrade parliament.