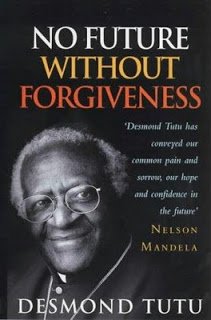 I have been reading Desmond Tutu’s No Future without Forgiveness again after I first read it when it was published. It remains fresh, powerful and irresistible. For me, the most compelling part of the book is a letter written by one “Helena” to the South African Truth and Reconciliation Commission, which Tutu reproduces in the book. It is a compelling story that brings a different angle to the pain of Apartheid.

My story begins in my late teenage years as a farm girl in the Bethlehem district of the Eastern Free State. As an eighteen-year-old, I met a young man in his twenties. He was working in a top security structure. It was the beginning of a beautiful relationship. We even spoke about marriage. A bubbly, vivacious man who beamed out wild energy. Sharply intelligent. Even if he was an Englishman, he was popular with all the “Boere” Afrikaners. And all my girlfriends envied me. ‘Then one day he said he was going on a “trip.” “We won’t see each other again . . . maybe never ever again.” I was torn to pieces. So was he. An extremely short marriage to someone else failed, all because I married to forget.

More than a year ago, I met my first love again through a good friend. I was to learn for the first time that he had been operating overseas and that he was going to ask for amnesty. I can’t explain the pain and bitterness in me when I saw what was left of that beautiful, big, strong person. He had only one desire-that the truth must come out. Amnesty didn’t matter. It was only a means to the truth. A need to clean up. He was gruesomely plucked out of our lives at the beginning of the year. Was that the price he had to pay for what he believed in?

After my unsuccessful marriage, I met another policeman. Not quite my first love, but an exceptional person. Very special. Once again a bubbly, charming personality. Humorous, grumpy, everything in its time and place. ‘Then he says: he and three of our friends have been promoted. “We’re moving to a special unit. Now, now, my darling. We are real policemen now.” We were ecstatic. We even celebrated.

He and his friends would visit regularly. ‘They even stayed over for long periods. Suddenly, at strange times, they would become restless. Abruptly mutter the feared word “trip” and drive off I … as a loved one … knew no other life than that of worry, sleeplessness, anxiety about his safety and where they could be. We simply had to be satisfied with: “What you don’t know can’t hurt you.” And all that we as loved ones knew . . . was what we saw with our own eyes.

After about three years with the Special Forces, our hell began. He became very quiet. Withdrawn. Sometimes he would just press his face into his hands and shake uncontrollably. I realized he was drinking too much. Instead of resting at night, he would wander from window to window. He tried to hide his wild, consuming fear, but I saw it.

In the early hours of the morning between two and half past two, I jolt awake from his rushed breathing. Rolls this way, that side of the bed. He’s pale. Ice cold in a sweltering night-sopping wet with sweat. Eyes bewildered, but dull like the dead. And the shakes. ‘The terrible convulsions and bloodcurdling shrieks of fear and pain from the bottom of his soul. Sometimes he sits motionless, just staring in front of him. I never understood. I never knew. Never realized what was being shoved down his throat during the “trips.”

I just went through hell. Praying, pleading: “God, what’s happening? What’s wrong with him? Could he have changed so much? Is he going mad? I can’t handle the man anymore! But I can’t get out. He’s going to haunt me for the rest of my life if I leave him. Why, God?” ‘Today I know the answers to all my questions and heartache.

I know where everything began, the background. ‘The role of “those at the top,” the “cliques” and “our men” who simply had to carry out their bloody orders . . . like “vultures.” And today they all wash their hands in innocence and resist the realities of the ‘Truth Commission.

Yes, I stand by my murderer who let me and the old white South Africa sleep peacefully. Warmly, while “those at the top” were again targeting the next “permanent removal from Society” for the vultures.

I finally understand what the struggle was really about. I would have done the same had I been denied everything. If my life, that of my children and my parents was strangled with legislation. If I had to watch how white people became dissatisfied with the best and still wanted better and got it.

I envy and respect the people of the struggle at least their leaders have the guts to stand by their vultures, to recognize their sacrifices. What do we have? Our leaders are too holy and innocent. And faceless. I can understand if Mr. de Klerk says he didn’t know, but dammit, there must be a clique, there must be someone out there who is still alive and who can give a face to “the orders from above” for all the operations. Dammit! What else can this abnormal life be other than a cruel human rights violation? Spiritual murder is more inhumane than a messy, physical murder.

At least a murder victim rests. I wish I had the power to make these poor wasted people whole again. I wish I could wipe the old South Africa out of everyone’s past. I end with a few lines that my wasted vulture said to me one night: “‘They can give me amnesty a thousand times. Even if God and everyone else forgives me a thousand times-I have to live with this hell. ‘The problem is in my head, my conscience. ‘There’s only one way to be free of it. Blow my own brains out. Because that’s where my hell is.”