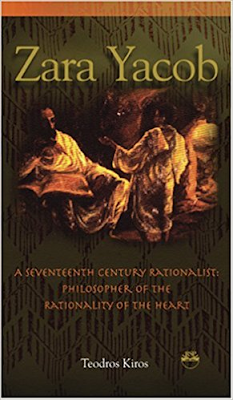 There has been resurgent interest in the seventeenth century Ethiopian philosopher and thinker, Zera Yacob (also identified as Zara Yacob).

Africanists historians and philosophers have long seen Yacob as the pioneer humanist thinker that he was, a precursor to Enlightenment liberal thought. Beyond Africanist scholars however, Yacob’s legacy has largely been obscured, even ignored, partly because of the relative neglect of African epistemic traditions in the Western academy.

But all that now seem to the changing as more non-Africanists re-discover Yacob. In a recent article in Aeon (A digital magazine dedicated to “provocative thinking”), the Norwegian historian Dag Herbjørnsru introduced Yacob to a new audience, placing Yacob firmly in the pantheon of Enlightenment thinkers.

Herbjørnsru argues that liberal Enlightenment ideas may not, as we have been schooled to believe, begin with René Descartes’s Discourse on the Method (1637) or the works of John Locke, Isaac Newton, David Hume, Voltaire and Kant. What if, Herbjørnsru asks, the Enlightenment can be found in places and thinkers that we often overlook such as in the treatises of Zera Yacob?

He states: “Many of the highest ideals of the later European Enlightenment had been conceived and summarized by Yacob long before they emerged in Enlightenment Europe. Yacob shows a much more agnostic, secular and enquiring method” than many later Enlightenment thinkers. By comparing Yacob’s treatises with those of Descartes and Kant, Herbjørnsru concludes that Yacob’s ideas more enlightened than his Enlightenment peers on questions of religion, slavery and the status of women.

Herbjørnsru’s article has triggered a vibrant debate over whether Yacob rightly belongs to the Enlightenment pantheon. The main critique is that while Yacob’s thoughts might have been exceptionally liberal for his time, they did not coalesce into a social and political movement as they did with the Enlightenment. Others however, question the wisdom of trying to fit this African thinker into the mold of European philosophers. Yacob, they insist, should be treated on his own terms. If anything, he fits more with a longstanding tradition of African oral and textual humanistic thought.

While these questions are unlikely to find definitive answers, I am pleased to see the debate happening at all. Given his ground-breaking liberal ideas, Yacob has been in the shadows for too long. Sure, there have been some important studies of this work, but these have never really engaged non-specialist audiences. The current debate promises to put Yacob’s work in the intellectual spotlight where it rightly belongs.

As a historian of human rights, I have long been puzzled by the complete absence of Yacob’s thought in the many “global” histories of human rights that have been written. Discussions of the philosophical antecedents of modem human rights often begin and end with European Enlightenment liberalism. This is why in my book Human Rights in Africa, I place Yacob’s Hatata alongside Thomas Pain’s “Rights of Man,” Rousseau’s “Social Contract and Descartes’ Discourses in my discussion of the ideas that have shaped the modern human rights movement.

My excerpts on Zera Yacob:

“Ethiopian philosopher and theologian Zera Yacob, who is most renowned for his critique of divine law and theory on natural law. In Hatata (Discourse), his polemical treatise on rationalism and Christian theology, he asserted that human action should be judged essentially on whether it advances or degrades overall societal harmony. Yacob’s ethics placed emphasis on human dignity, tolerance, non-violence and mutual responsibility. Two central themes in his work are the sanctity of life and individual freedom.

The first assertion in the Hatata is that man is created a free being and “endowed with the power of reason and the light of intelligence.” In the Hatata, freedom is defined in relation to individual choice and initiative. Human freedom, like human intelligence, is a gift from God to “man” so that, through good choices, he may fulfill his destiny.

Yacob’s ethics in the Hatata also includes an affirmation of the communitarian duty of each person toward those individuals within the societies in which they live. Although he drew on an eclectic mix of Christian, Muslim and indigenous thought, Yacob’s ethics rejected many established Judeo-Christian and Islamic traditions of his time as oppressive and discriminatory.

His point of departure was rationalism. Man is a creature of God, but he was created to be free and intelligent. On this ground, one Zera Yacob scholar has argued that Yacob’s critique of discrimination against women marked, in the context of seventeenth century Ethiopia, a radical defense of “human rights, equality and freedom.”

Yacob also proffered a moral condemnation of the slave trade because, according to him, it was against God’s will. He wrote: “It is stated in the text that buying and selling human beings like an animal is right . . . this law does not come from the Creator of human beings, who created us equal as brothers, so that we call our creator our Father.”36 For proponents of African human rights values, the humanist ideas in these theological and philosophical writings provide the normative foundations for a conception of human rights founded in African history and culture.”

The rediscovery of Zera Yacob is long overdue.

Book of the Week: John Foran, Taking Power: On the Origins...