Home Development What is the price of Peace? 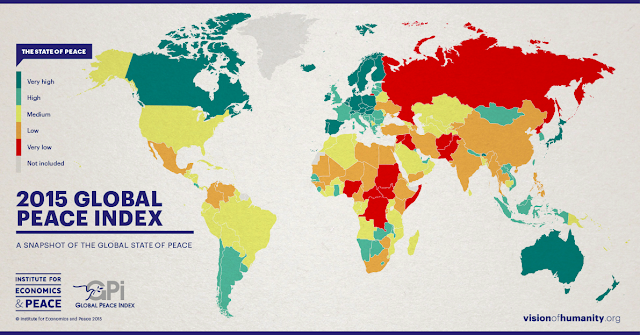 The spate of terrorist attacks from Paris to Turkey, Lebanon to Nigeria demands our collective reflection on the price of peace.

The Institute for Economics and Peace, an policy think-tank, issues an annual Global Peace Index (GPI) that uses a variety of indicators to score and rank peacefulness in 162 countries around the world. In its latest report, the Institute stated that while the overall number of wars being waged around the world is declining, the world has become much less peaceful.

In fact, such peacelessness cost the global economy about thirteen hundred dollars ($1,350) per person last year. What is the value of peace? In 2012 the Institute for Economics and Peace estimated that world peace was worth $9.4 trillion. A year later, that number had grown to $9.8 trillion—or 11.3 percent of global GDP (I like to recite these numbers because they get the attention of those bean counters obsessed with quantitative measurements). Numbers and dollars signs also grabs the attention of politicians and policymakers.

So, how exactly do wars and peace decline at the same time? How can we have fewer wars, but less peace? The post-Cold War period has seen a spike in internal conflicts and civil wars, but overall conflicts between nations and state militaries are becoming less frequent. However, global peacefulness has been falling for the past seven years, and over 500 million people currently live in countries at risk for further declines in peacefulness in the short-term.

This is principally because War is no longer the preserve of national armies and sovereign powers. Non state actors increasing have the capacity to engage in armed conflict thereby reducing overall peacefulness around the world. This takes the form of domestic terrorism, insurgencies, rebellions, revolts and uprisings.

In other words, we have fewer wars and less peace today because conflict has become democratized. It is easier today for non-state actors such as militant insurgent groups with no fixed addresses to unleash wide scale violence than at the height of the Cold War. Today, the weapons of mass destructions are not confined to state armories. They are also in the hands of terrorists, insurgents and unregulated militias who have less qualms about deploying these weapons.

We need to think of peace not simply in terms of pressuring governments to avoid war but also in terms of good governance, mass education, economic and social reforms to address the alienations and hopelessness that drive so many young people into the hands of crazed Islamist terrorists.