Home Human Rights Time to stop the killings in Syria 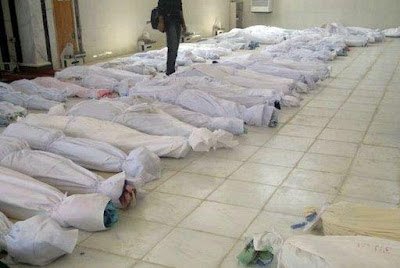 I woke up this morning to the disturbing headline: “108 Civilians Massacred in Syria.” The story was accompanied by a photograph of rows of corpses wrapped in cloth. Some of the victims were clearly children. The rest of the story was banal in comparison: The United Nations Security Council condemns the Syrian government for its role in the massacre; Syrian officials and opposition forces trade blame over responsibility for the killings; Russia opposes stronger language for the Security Council resolution condemning the Syrian government.

I get a feeling of déjà vu. We’ve seen several similar scenarios in the past few years – In Darfur, Libya, Yemen. Innocent civilians are being massacred in the thousands and the world “holds talks.” Everyone agrees that the Syrian government actions not only violate the cease-fire engineered under United Nations auspices but also jeopardize any effort at peace. Yet, there is obstinate unwillingness to take immediate concerted actions to stop the killings.

No doubt, the situation in Syria is a complicated one. The struggle to oust the Assad regime has metamorphosed into a regional battle between Sunni and Shiite nations – a proxy war, with Saudi Arian and Iran pulling the strings. But at some point people’s lives should matter more. It is time for world leaders to take decisive action to stop the killings.

American leaders facing upcoming elections are foot-dragging. The Russian and Chinese governments seem more concerned with strategic geopolitical calculations. Arab states in the region have been more hindrance than help. The Annan ‘peace’ plan has achieved little, allowing the Assad regime more time to execute its military onslaught. It is time to stop the killings.

Last year, I wrote comments below about the massacres in Libya. Help in that case came too little too late. The Story in Syria is turning out to be the same.