Home Education The Poverty of Illiteracy 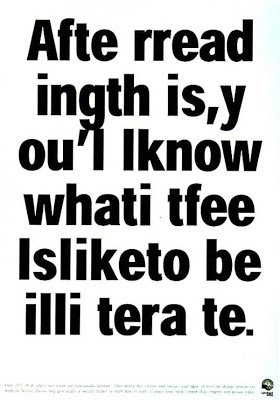 I had an epiphany today.

A routine visit to the optometrist to check out my failing eyes gave me a new perspective on the withering deprivation and poverty that is illiteracy.

As part of the process of testing my eyes for reading glasses, the optometrist put in some eye drops to dilate the pupils of my eye. It would take about 30 minutes for the eye drops to work, so she asked that I return to the waiting room to wait for further test. One effect of the eye drop, she told me, was that I would have very blurry vision and be unable to read or see clearly.

I didn’t think much of this until she put in the eye drops and I returned to the waiting room. The world suddenly became a blur. Posters and images on the wall became fuzzy and distorted apparitions that made no sense. So were the images on the TV.

Everyone else in the waiting room seemed to be reading something, so I pulled a magazine from the rack. All I could see were meaningless wiggly black lines. I could make out some of the pictures on the page but the words meant nothing to me.

There was a beep on my blackberry. I had an instant message; perhaps the message from the office that I had been expecting. I snatched the phone from my holster in anticipation. Alas, it was all a blur. I couldn’t even make out the alphabets on the keypads.

An hour later, my vision was back in focus and I was literate again. I left the optometrist’s office with a new found appreciation of the gift of vision and the value of literacy. I have always believed that literacy and education are fundamental human rights to which everyone should be entitled. But now, I believe that more strongly than ever before.