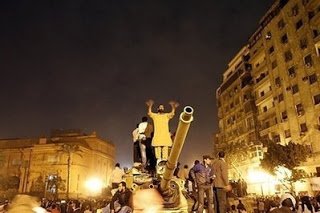 The developments in Egypt following the clash between anti and pro Mubarak supporters in Cairo’s Tahrir square have been gripping. What had been a largely peaceful protest against the dictator quickly deteriorated into an urban free-for-all brawl allegedly instigated by government forces. Innocent lives have been lost and hundreds wounded. As one earnestly hoping that this uprising eventually succeeds in bringing true democracy to Egypt and the Arab world, I am saddened but not surprised by this turn of events.

After thirty years in power, Mubarak and his cohorts are growing desperate. His pledge to leave power is September has not dampened the resolve of the protesters. The people have lost their fear of the instruments of state terror that have held them captive for so long. The dictator’s options are narrowing. What I see in the apparently coordinated attempt to derail the uprising is the proverbial last kick of a dying horse.

The battle of Tahrir Square would be funny if it wasn’t so tragic and if the stakes weren’t so high. Some of the news reporting read like comedy scripts. If one can put a positive spin on this event, it would be that the battle of Tahrir Square has so far been fought with “crude” medieval weapons — pavement stones, whips, horses and camels. This must explain why after two days of fierce clashes, the reported fatalities are in the single digits. The lesson: A people committed and desperate enough will use whatever they have to defend their revolution. One AP report best captures the scene:

“… In one almost medieval scene, a small contingent of pro-Mubarak forces on horseback and camels rushed into the anti-government crowds, trampling several people and swinging whips and sticks. Protesters dragged some riders from their mounts, throwing them to the ground and beating their faces bloody.

The horses and camels appeared to be ones used to give tourists rides around Cairo. Dozens of men and women pried up pieces of the pavement with bars and ferried the piles of ammunition in canvas sheets to their allies at the front. Others directed fighters to streets needing reinforcements.
The protesters used a subway station as a makeshift prison for the attackers they managed to catch. They tied the hands and legs of their prisoners and locked them inside. People grabbed one man who was bleeding from the head, hit him with their sandals and threw him behind a closed gate.
Some protesters wept and prayed in the square where only a day before they had held a joyous, peaceful rally of a quarter-million, the largest demonstration so far.”