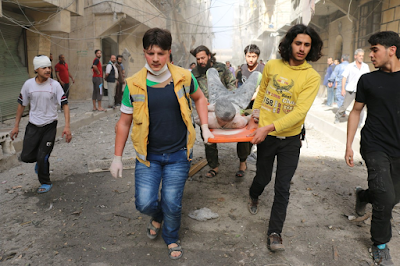 As the war in Syria enters its seventh year with no immediate prospects of ending, the words of the British war poet, Wilfred Owen rings no truer. “My subject is War, and the pity of War,” Owen wrote. “The Poetry is in the pity.”

The pity of war in Syria is laid bare in our 24-hour media circle: 400,000 dead; 6 million people, including 2.8 million children displaced inside the war-torn country; 5 million Syrians scattered all across the Middle East and in Europe as refugees; a generation of Syrian children and youth lost to war.

Although Wilfred Owen wrote in the tumult of the First World War, his insights into the horrors and pity of war are as relevant today as they were a century ago.

What passing-bells for those who die like cattle?
Only the monstrous anger of the guns.
Only the stuttering rifles’ rapid rattle
Can patter out their hasty orisons.
No mockeries now for them; no prayers nor bells,
Nor any voice of mourning save the choirs,-
The shrill demented choirs of wailing shells;
And bugles calling them from sad shires.
What candles may be held to speed them all?
Not in the hands of boys, but in their eyes
Shall shine the holy glimmers of goodbyes.
The pallor of girls’ brows shall be their pall;
Their flowers the tenderness of patient minds,
And each slow dusk a drawing-down of blinds.

No one is born hating…