Home Politics Reflecting on the Meaning of Change 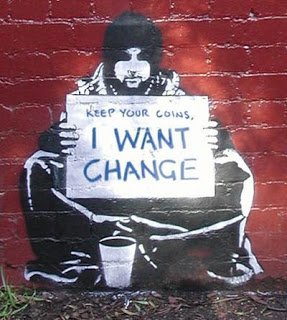 The Hamilton Magazine asked a panel of scholars to reflect of the meaning of “Change.” These are excerpts from my reflections. The full article makes for interesting reading.

http://www.hamiltonmagazine.com/sitepages/?aid=211&cn=Features&an=Change%20Now
“There’s an old Chinese proverb,” reflects Dr. Bonny Ibawoh. “Catch a fish for a man you fed him for one day in his life. Teach a man to fish, he can feed himself for a lifetime.” The Director of the Peace Studies Program and the Centre for Peace Studies at McMaster University, Ibawoh sees the maxim as loaded with meaning for humanitarian projects. “Maybe we want to continue catching fish because it feels good for us,” he adds. “That says a lot about the way we do things.” Pearson seems to agree, at least when this principle is applied to Hamilton’s Poverty Roundtable. “If you’re talking about an issue of poverty, those most affected by the conditions of poverty have to be heard as well as those in positions to effect change.”
…. Knitting his hands behind his head and leaning back in his chair, Ibawoh recalls one of his favourite experiences of change. Ibawoh grew up in a west-African society that practiced female circumcision – a practice that has garnered a lot of attention and concern from the global society – both for the way in which it was practiced and the long-term effects of the tradition. “A lot of NGOs came to tell people what they were doing was wrong and they gave it a name, ‘mutilation,’ without understanding that this wasn’t the society’s intention,” he says, shaking his head. “It was a rite of passage into womanhood.” While the NGOs were well-intentioned, the society felt demonized and pushed back. Then something happened. “Some NGOs decided to get the society on board. They began asking why the practice was done, what the reason was behind it.” Through discussion, the NGOs and the society were able to begin to work through the issue, finding other options that suited everyone – especially the women. It’s a good story that leads one to wonder if there is enough conversation happening around poverty – a conversation that values input from everyone. Of course, there are many sides to the argument, but according to Susan, as long as there is no place for her voice, or the voice of others like her in greater numbers, the answer is no.
http://www.hamiltonmagazine.com/sitepages/?aid=211&cn=Features&an=Change%20Now

Unlearning Prejudice: History can teach, but we must be willing to...