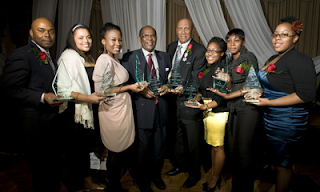 It is humbling and gratifying to be found deserving of an honor as prestigious as the Rev. John Holland Award. The intriguing and inspiring life of Rev. John Holland makes the award even more meaningful. Awarded “Distinguished Citizen” for the year in 1953 (the first person of African heritage to be so named in Canada), John Holland rose from a lowly newspaper boy to become one of the most prominent citizens of Canada. It is an honor to be associated with this award and the other 2011 recipients which included the great baseball Hall of Fame pitcher Ferguson Jenkins.

It didn’t matter how far along in their careers they were, receiving a John C. Holland award inspired winners to keep contributing to their communities.

For 18-year-old Beatrice Boateng getting a youth achievement award meant she could help her family financially and set aside some money toward her future.

“I actually needed this to support my family and also for school, so it was a really great opportunity,” the St. Thomas More Catholic Secondary School student said after receiving her prize. “I plan to use this for my university (tuition) to go higher and pursue my career.”

For Joe Halstead, chairman of the Ontario Place Corporation and a key player in bringing the 2015 Pan American Games to Toronto, winning an award of merit that night was validation of his years of service on the federal, provincial and municipal levels.

“What it says to the community more so than anybody else is that they are being watched. People care about you. And they see that you have made a contribution and that contribution is being not only appreciated but recognized,” Halstead said. “So I think it’s important to support these things. They’re a source of encouragement and inspiration.”

Baseball Hall of Fame pitcher and Chatham native Ferguson (Fergie) Jenkins was also honoured Saturday night, as a stamp with his image issued by Canada Post for Black History Month was unveiled.

“Sometimes it’s overwhelming,” Jenkins said during the dinner. “You think that they’re printing four million stamps with your face on it and they’re going to be distributed around the country which is pretty awesome in itself.”

The event was hosted by the Hamilton Black History Committee and is named after Rev. John C. Holland, who was the son of a runaway slave and worked as a railway porter for 33 years before becoming a minister at Stewart Memorial Church.

He died a year after he was named Hamilton’s Distinguished Citizen of the Year in 1953. Holland was the first black person to be named a citizen of the year in any community in the country.

“This particular event acknowledges the rich contributions of the African presence in Canada since the early 1800s and we want, really want, all of us as Canadians to know about each other,” committee co-chair Evelyn Myrie said.

The Chatham, Ont., native and Baseball Hall of Fame pitcher has won 284 Major League games, led the National League twice in wins and had six-straight seasons with 20 or more victories.

He started in the big leagues in 1965 and played most of his career for the Chicago Cubs.

In 1971, he was the first Canadian to win the Cy Young Award as the National League’s best pitcher.

Jenkins, whose ancestors were slaves who came to Ontario through the Underground Railroad, started the Fergie Jenkins Foundation about 12 years ago to support various charities.

Halstead is the chairman of the Ontario Place Corporation and is a member of the board of directors of the Metrolinx Corporation, the regional transportation authority. He also sits on the board of the Maple Leafs Sports and Entertainment Team Up Foundation.

His capacity as the vice-chair of Toronto’s Pan American Games bid committee helped secure Toronto as the host city for the 2015 event.

Halstead has also served as the commissioner for economic development, cultural and tourism for the City of Toronto from 1998 to 2006. He was also the chair and CEO of the festival management committee for Caribana, from 2006 to 2010.

The 39-year-old is the founder and executive director of Liberty for Youth, a nonprofit organization that works with at-risk young people.

He has 23 years of experience as a mentor, tutor and counsellor for youth in group homes, prison and detention centres.

About five years ago, Dryden started a partnership between the at-risk youth his organization serves and Hamilton police officers, bringing both sides together in a basketball event to raise money for Liberty for Youth.

“To me it’s so awesome because … it just shows that what we do is important and what we do does have an impact,” Dryden said. “We can go back and say to them: ‘You are important.’ This is not an award for me; it’s (about) the end result.”

Montague has also been involved with the Afro-Canadian Caribbean Association (ACCA) by helping children prepare over a 16-week period for a regional spelling competition and helping run an ACCA summer camp.

The 18-year-old is also active with her church, through which she ran a March Break soup kitchen. She is also part of the local Jamaica Foundation and active in high school, volunteering for Neighbour 2 Neighbour, Hallowing for Hunger and the Utopia Club, which raises awareness on global issues and raises money for charities.

The 18-year-old St. Thomas More Catholic Secondary School student has volunteered with a range of local charities and fundraising events.

Boateng spends time with the elderly at Shalom Village and helped raise funds for Kenya and the Dominican Republic by participating in the Catholic board’s Pilgrimage Walk.

She is also a volunteer for the Hamilton Public Library and baked goods and organized seating for her school’s MORE Extreme fashion show last year, which raised funds for Angelman Syndrome research.

Boateng wants to study nursing and become a nurse practitioner.

The George Brown College student is studying culinary arts and wants to become a chef and open a restaurant and catering business.

The 18-year-old raised money for War Amps and world hunger relief during her time at Westdale Secondary School. Her teachers also selected her to help Grade 9 students adjust to high school in their first semester.

Morgan served three years as a member of the Hamilton Wentworth District School Board’s Black History Month committee. She is also involved with Stewart Memorial Church and has volunteered at the John C. Holland Awards gala for eight years.

“It’s such a big award that I can’t believe it was me … It’s very important but also it’s deeper than that because my dad and my grandma are very involved,” she said. “So this … is a representation of how well they raised me. How much they pushed me toward my goals.”

The 23-year-old head coach of the Niagara Thunder bantam basketball team lead her girls into their best year last year, placing seventh in the province.

Harris started coaching the minor league basketball league team in Grimsby more than three years ago when the girls, who were about nine years old at the time, were starting out as soccer players without experience in the new sport.

“All I’ve ever said with coaching is that I just wanted to give back half of what I’ve learned and I feel like I was able to do that and this award solidifies the great job that I’ve been doing.”

Chuinkam is in her fourth year of life science at McMaster University with hopes to attend medical school this fall.

At McMaster, Chuinkam has been a peer mentor for international students, a member of the school’s chaplaincy board, the treasurer for the McMaster African Students Association for two years and the director and co-ordinator for the Afrofest Cultural Show.

“It’s the first big recognition I have ever had in my entire life and it’s encouragement for what I’m doing.”

Broox was recognized as a promising poet in Jamaica in the 1980s and brought his artistic zeal to Hamilton when he immigrated in 1993.

He co-founded Dub Poets Collective and has been hosting PoeMagic, a performance-oriented, monthly poetry event, since 1997. He also partnered with the Hamilton Centre for Civic Inclusion in 2007 to host the intercultural multi-arts event, Hamilton Speaks!

The 53-year-old Hamiltonian’s 2005 poetry collection, My Best Friend is White was a Number 1 best-seller on Amazon.com last year and his work is used in English and creative writing courses at McMaster University and the Ontario College of Art and Design.

“It feels good to be acknowledged and recognized for the work that one does and it’s inspiring. It’s an engine for future effort,” Broox said.

Dr. Ibhawoh is an associate professor with the department of history at McMaster University and was the director of the school’s centre for peace studies from 2006 to 2010.

The professor researches legal history, African history and politics and international human rights and has been published in the Human Rights Quarterly, Human Rights Dialogue and the Canadian Journal of African Studies.

His book, Imperialism and Human Rights, was named the Choice Academic Title in 2007.

Ibhawoh could not attend the awards Saturday because he was on research leave in South Africa.

Wars Do End: Why Conflict In Africa Is Falling – By...

HAITI: Media Reporting and the need for Historical Contextualization