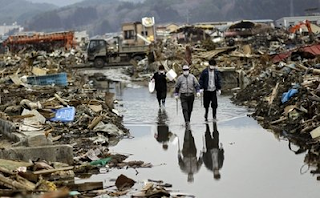 Obama talks about the “Audacity of Hope” but I just discovered something else – the “Tenacity of Hope.” I was listening to a BBC news report of how communities in Japan are rebuilding after the devastating earthquakes and Tsunami in that country. They interviewed a 70 year old rural farmer who was working with his grandson to clear the rubble of what used to be their home. “How do you get the strength and motivation to carry on amidst all this devastation?” the BBC journalist asked the man. “Doesn’t the task of rebuilding all that has been lost overwhelm you?” His reply was an eloquent testament to the “tenacity of hope.”

“Our city…” he said (and I am paraphrasing here) “…has been destroyed several times in history by tsunamis and earthquakes. It is the nature of our land. But each time it was always rebuilt …better than before. There is a spirit of resilient rebuilding that our parents passed on to us. It is our duty to pass that spirit of rebuilding on to the next generation. It is crucial to our country’s survival. This is why I must work here with my grandson to clear the rubble… to pass on that spirit of rebuilding…”

The Japanese have always struck me as a resilient and determined people. Any student of history or indeed anyone who has read the intriguing novel Black Rain knows about the devastation the country endured after the dropping ofthe atomic bomb in Hiroshima and Nagasaki during the Second World War. Yet, barely five decades later, it had emerged from the rubbles to become one of the strongest industrial economies in the world. This time too, I am sure the country will rebuild and flourish. Our hearts go out in solidarity to the Japanese people as they rebuild. There is a much the rest of us can learn from that nation’s spirit of resilience and tenacity.

A Voice for Africa: Stephen Lewis and the Race Against Time

The Paradox of Democracy in Aung San Suu Kyi’s Myanmar