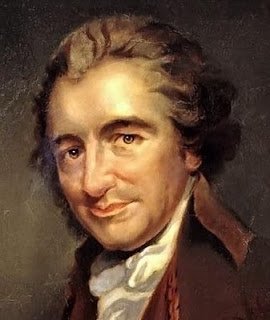 While I do not agree with all his ideas, I share some of Thomas Pains’ skepticism about organized religion. Pain is not my favourite enlightenment philosopher but there is something appealing about his defiant, skeptical, even cynical approach to what he calls the “tyranny of religion.” It is estimated that eighty percent of all human conflicts throughout history have some links (direct or indirect) with religion. Whether religious beliefs are the roots of war or simply a contributory factor, you’ve got to admit that much pain and suffering have resulted from religious dogma. Unlike Karl Marx who dismisses religion as the “opium of the people,” Thomas Pain’s approach to religion is more nuanced and engaged. His keen questioning deserves attention if not agreement.
Is it not a species of blasphemy to call the New Testament revealed religion, when we see in it such contradictions and absurdities? — Thomas Paine
Of all the tyrannies that affect mankind, tyranny in religion is the worst. — Thomas Paine
That God cannot lie, is no advantage to your argument, because it is no proof that priests cannot, or that the Bible does not. — Thomas Paine