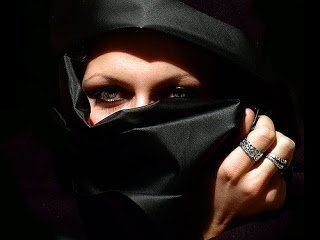 A Muslim cleric in Saudi Arabia has called on women to wear a full veil, or niqab, that reveals only one eye. Sheikh Muhammad al-Habadan said showing both eyes encouraged women to use eye make-up to look seductive. The question of how much of her face a woman should cover is a controversial topic in many Muslim societies.

The niqab is more common in Saudi Arabia and the Gulf, but women in much of the Muslim Middle East wear a headscarf which covers only their hair. Sheikh Habadan, an ultra-conservative cleric who is said to have wide influence among religious Saudis, was answering questions on the Muslim satellite channel al-Majd.

———————————————————–
This is an interesting story that raises several human rights questions. I posed some of these questions before my Human Rights class and it generated extensive debates among students. The comments posted on the course discussion forum were as always engaging and insightful.

This is another example of the “Universalism vs. Cultural relativism” debate we have been having in class. A Saudi cleric wants women to wear veils that show only one of their eyes. Cultural/religious expression or human rights violation?
http://news.bbc.co.uk/2/hi/middle_east/7651231.stm

Posted by xxxxxxx on Saturday, October 4, 2008 10:25am
Subject: Re: Saudi cleric favours one-eye veil
After I read this article, I went to other related articles posted and only after reading more I have come to the decision that this “one-eye veil” is both a religious expression but at the same time a human rights violation.

The niqab is very normal for people in the Middle East, along with the hijab. I believe that it is a religious expression because it is told to them in the Koran. What I don’t understand is why they are deciding to change things now? It is at this changing point that I think this whole issue is a human right violation due to the fact that the Koran hasn’t changed therefore implementing the “one-eye veil” and deeming it a religious expression just doesn’t make sense to me.

So that’s what I think…for now. thoughts anyone??

Posted by xxxxxxxxxx on Saturday, October 4, 2008 12:12pm
Subject: Re: Saudi cleric favours one-eye veil
I also read one of the related articles on the site and it gave a lot more background information. I think it’s hard to say whether this is a human rights violation mostly because it is difficult to make myself completely unbiased by the fact that I have grown up in Canada and have no idea what it would be like to live in an Islamic nation. In putting my own views aside, the one eyed veil seems to be a srtict adherance to the Koran, but does that make it something that EVERYONE must follow? in the related article I read it stated that many women choose a more contemorary view on covering up, and feel that the full veil is an old cutsom.

I think that it should be the woman’s choice whether or not she wants to commit to the full veil or not. for example, here in Canada it is now legal for a woman to go topless. This just gives a woman the freedom to choose whether or not she wants to wear a shirt in ublic or not. I know that both of these situations are on completely opposite ends of the spectrum, but they are related in a way that human rights should be about a person’s right to choose.

Posted by xxxxxxxx on Monday, October 13, 2008 8:11pm
Subject: Re: Saudi cleric favours one-eye veil
The issue is not that woman are choosing a specific form of attire. It is essentially a personal choice that harms no one. The only problem I have is that woman are being made to think that it is their religious obligation. Their decisions are not based on an understanding that whatever this cleric is representing is essentially his personal extreme interpretation of the Qur’an and Hadith, but rather its being portrayed as what Allah wants women to do. Whereas the reality is that women during the Prophet Mohammed’s time; peace be upon him, we doctors, warriors, teachers…etc. all roles that could have been impossible to be done with one eye! In fact, the prophets wife were recognized by their faces, so even the veil with both eyes showing is not seem as an obligation by the majority of the Muslim clerics.

The problem is not what women are choosing to wear; it is the fact that they are being misled. So, if a woman knows that it is not a divine order from God that asks her to wear the veil and still chooses to wear it, then I would not consider the veil a violation of human rights. However, if she wears the veil because she thinks she “has” to, then that is a violation of human rights. Because if she was not made to think that this is the will of God she would not be wearing it.

Posted by xxxxxxxxxx on Tuesday, October 14, 2008 11:03am
Subject: Re: Saudi cleric favours one-eye veil
I think this issue is about the woman’s right to choose how she is to be submissive to Allah – whether it be modest dress, an hijab, a burka, or a one-eyed veil – and the infrastructure and support to hold sacred that right to choose. Now there will always be complications, a husband’s family that is more conservative or extreme than the woman’s upbringing – which would put pressure on her to decide their way – this will always happen..

However, in a society that endorses the right to choose and not be legally beholden to a certain interpretation, seems a step in the right direction – or separation of religion and state, and the freedom to choose the particular sect of Islam that expresses it’s submission to Allah in ways that aligns with one own’s thinking. This would protect women from the wims and re-interpretations of various imams and provide more stability.

But even the right to choose and the separation of religion and state is not a universally upheld idea…though, as Dr. Ibhowah says, if these things align with texts and scriptures that, in this case, Islam holds as truth, then this can be pointed out to this particular sect of Islam – using their own revered and upheld truths against their interpretation.

And if that fails…it is up to the muslim community, in particular those who uphold the basic rights of women to choose, to put pressure on them. The pressure must come from the greater muslim community…

Posted by xxxxxxxx on Saturday, October 18, 2008 12:48pm
Subject: Re: Saudi cleric favours one-eye veil
I think that the wearing of a one-eye veil, or whatever else a Muslim woman wishes to wear in order to promote her piety and religious faith, is a culturally relative option and decision that does not infringe on said woman’s human rights. However, I think that it ought to be her analysis of the Quran and Islam that brings her to that decision. Rather, the response that she gets from her religious and societal community in regards to her decision is where a human rights violation is possible and unacceptable.

I agree completely with xxxxxx… if a woman feels that she “has” to wear the veil (esp. a one eyed one), then it is a human rights violation because she is in a way, being coerced to wear such attire, which would be very restricting. Taking into account the historical background of where these veils and such came from, and looking at the issue during the Prophet’s time, we see that the religious call for the one-eyed veil is extreme and not necessarily needed to fulfill the demands of modesty required for Islam. Therefore, under no circumstances should any woman be forced to wear this type of covering (by force or subtle manipulation). If she understands that she does not “have” to wear it, but chooses to wear it, in a completely free decision, then that is her choice and she has a right to that. The problem is… how can we assure that this choice is her own, and not influenced by others?