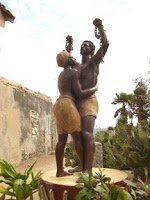 The contentious issue of Reparations for Slavery seems to be engaging more and more academic interest these days as evident from the following recent publications:

– Rhoda E. Howard-Hassmann, “Reparations to Africa and the Group of Eminent Persons,” Cahiers d’études africaines
– Rhoda E. Howard-Hassmann, “Getting to Reparations: Japanese Americans and African Americans” Social Forces, 83, 2 (Dec., 2004), pp. 823-840
– Victor T. Le Vine, Commentary on “Framing Reparations Claims: Differences between the African and Jewish Social Movements for Reparations”African Studies Review – Volume 50, Number 1, April 2007, pp. 49-51
– Rhoda E. Howard-Hassmann, Lombardo, Anthony P. Framing Reparations Claims: Differences between the African and Jewish Social Movements for ReparationsAfrican Studies Review, 50, 1, 2007, 27-48.
– Ricardo Rene Laremont, “Jewish and Japanese American Reparations: Political Lessons for the Africana Community,” Journal of Asian American Studies – Volume 4, Number 3, October 2001, pp. 235-250
– Rhoda E. Howard-Hassmann, “Reparations to Africa and the Group of Eminent Persons,” Cahiers d’études africaines
Here is an excerpt from the last article on the list:
“There are two major precedents for reparations to Africa. They are reparations to Jews for the Holocaust, and the movement in the United States for reparations to African-Americans. The issue of reparations to Jews for the Holocaust resurfaced in international discussion in the 1990s when Jewish groups began to demand that unpaid life insurance policies on victims of the Holocaust be paid, and that monies deposited by Jews in Swiss banks before and during the Second World War be paid to survivors of murdered Jews (Barkan 2000: 3-29, 88-111; Brooks 1999: 13-81). Increasingly, African-Americans and Africans became aware that “some” people–most especially Jews–seemed to be entitled to reparations for their suffering, while others were not. That in the view of many people in the formerly colonized world, Jews had become colonial oppressors of Palestinians merely compounded the problem. In some African eyes, it appeared that “white” victims of mass atrocities were entitled to compensation, while non-white victims were not. Thus Mazrui (2002: 87) asked: “How do twelve years of Jewish hell… compare to several centuries of Black enslavement?” Abiola (1992: 910) shortened the period of Jewish suffering even further, referring to the “six-year holocaust perpetrated against Jews by Hitler”. Joseph Ndiaye, curator in 1998 of the Maison des Esclaves (House of Slaves) on the Island of Goree off Senegal, from which slaves apparently used to be shipped to the Americas, offered a similar opinion. He said: “We never stop hearing about the Holocaust, but how often do we dwell on the tragedy that took place here over 350 years; a tragedy that consumed tens of millions of lives?”
“How do twelve years of Jewish Hell compare to several centuries ofBlack enslavements.”
– Ali Mazrui
I personally find no reason in comparing African slavery with the Jewish Holocaust, save for purely academic and heuristic purposes. There is something about comparing tragedies and the mentality of “My pain is greater than yours” that I find unsettling. However, Ali Mazriu’s question speaks to a concern that has been frequently expressed by many Africans and Africanists. It is concern, not so much about reparations for slavery, but about the commemoration of slavery.
How many major Holocaust Museums, monuments and Memorials are there in North America? 20? 40? 50? How many major museums and memorials to the slave trade are there in North America? NONE. I know this because I teach an African Diaspora class where we focus on slave commemorations and memorials. True, there are a few monuments to commemorate slavery scattered across the US and Canada. There are also several slave exhibits in museums across the US (The Smithsonian even has one) but no single major slave museum. There is no national institution dedicated to the documentation, study, and interpretation of Slavery as there is in the United States Holocaust Memorial Museum.
It is only now that efforts are being made to establish a National Slave Museums though the private initiative and funds of some prominent African Americans. http://www.usnationalslaverymuseum.org/home.asp
Even then, the project has been dogged with controversy. Lengthyeditorials have been written about how a slave museum is unnecessarybecause it would open up “old wounds.” Others have suggested a”National African American Heritage Museum? Rather than a “SlaveMuseum.” So, the question I ask is “Who is Afraid of a SlaveMuseum?” Why does Africa’s pain matter less? Issues like this are atthe heart of the reparations debate? — An overwhelming sense thatAfrica’s pain, Africa’s experiences and Africans themselves matter lessthan others.
This is what I think this debate should really be about –- not reparations but commemoration. How and why have we remembered or failed to remember slavery in our societies? What have we done to commemorate that human tragedy and honor the memory and contributions of its teeming victims? Why do we persist in giving the unsetting impression that the pains of some matters more than those of others? Talk about the commemoration of slavery must precede any talk of reparations for slavery!

Colonial Brutality Revisited: “Atoning for the Sins of Empire”