Home Education Of Peace Studies and “Men of War” 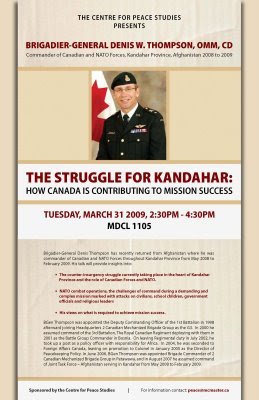 Should an institution dedicated to the study of peace be providing a forum for a “man of war” to express his views on war? This is a question that I have been confronted with in recent weeks following my decision in my capacity as Director of the Centre for Peace Studies at McMaster University to invite Brigadier-General Thompson of the Canadian Armed Forces to our campus for a talk on the Afghanistan war.

I don’t really think that a University as an academic institution should be justifying its invitation to an individual to debate topical issues. This is exactly what universities are for. Even where we do not agree with the views expressed by others, we have a responsibility to provide an intellectual space to engage and interrogate their ideas.
As an academic discipline dedicated to the study of conflict and conflict transformation, Peace Studies should be engaged with all perspectives on the subject of war and peace. An increasing number of students in Peace Studies programs in many universities including ours are active-duty military personnel who have come to Peace Studies with the hope that it can have some relevance to their chosen careers.
Besides, Brigadier-General Thompson is eminently qualified to speak not only on the subject of war but also on the subject of Peace. Apart from his recent posting as commander of Canadian and NATO Forces in Afghanistan, h hase served in the Canadian Foreign Affairs ministry as Director of Peacekeeping Policy. His insights on Canada’s role in international peace building will be particularly relevant to our students. As several scholars have pointed out, security is integral to sustainable Peace building in post-conflict societies.
Our commitment to peace should include a willingness to be open to ideas and providing an intellectual space to debate them even when we do not agree with them.