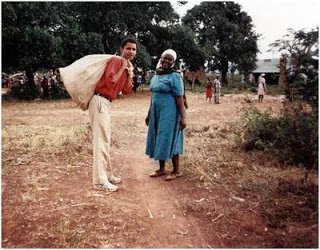 This is my favorite photo of Barack Obama. It was taken on his way to the village market in Kogelo, Kenya.

He tells in his autobiography “Dreams of my Father (a book I recommend to everyone), that he barely knew his Kenyan father and met him only once in his life. Yet, after graduating from Columbia University he went back to Kenya to visit his Kenyan family and spent several days in the village with his step grandmother, accompanying her to the village market, the farm and getting to know the extended family. He visited uncles and aunts, nephews and cousins, many of whom did not even know that their “brother” had fathered a son with a white woman while studying abroad. He visited the graves of his father and grandfather he never knew, where, overwhelmed with emotion he broke down and wept. Like a lost child he felt that he had finally connected with his ancestral roots. It is a story for the ages.

Columnist Joe Klein writing in Time magazine says that this book “may be the best-written memoir ever produced by an American politician.” I agree.