Home Human Rights Obama and the Politics of Race: Between Irish-American and African-American 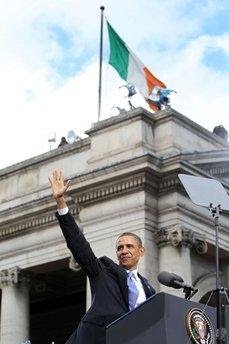 Below is an insightful article that appeared in The Irish Times on the occasion of President Obama’s visit to Ireland. The author is obviously addressing contentious questions of race and Irish self-identity. But I think it bears broader relevance to the politics of race not only in Ireland and the United States but elsewhere in the world.

It is a reminder that even with the election of Barack Obama as President of the United States we really still cannot talk about a post-racial era. Much has changed; but much still remains to be done to create a world where men and women are judged by the content of their character and not by the color of their skin.

Obama not just another excuse for blarney
Fintan O’Toole
The Irish Times – Tuesday, May 24, 2011

JAMES AUGUSTINE Healy, bishop of Portland, Maine from 1875 to 1900, was one of the great wave of Irish prelates who built the Catholic Church in America. He was typical of the Irish clerics whose phenomenal energies turned the church into the institution that integrated the Famine Irish into American society. He was one of the bishops who concelebrated the High Mass at the inauguration of the great temple of Irish America, St Patrick’s in New York.

I’m looking at a picture of Healy as I write. His head is erect, his eyes have the proud, steady gaze of a prince of the church. His skin looks a little dark, but if you didn’t know anything about him, you’d assume that’s just because the print is poor. A 19th century Irish Catholic bishop could not possibly be black.

But Healy was – as black, that is, as Barack Obama. He had been born in Macon, Georgia, in 1830, the son of an Irish-born planter Michael Healy and a slave woman, Mary Eliza Smith. This was not the usual story of a slave owner exploiting his chattel – Michael and Mary Eliza saw themselves as a married couple. But James Augustine Healy inherited his mother’s legal status – he was born a slave. He escaped his fate only because his father sent him north to be educated.

Healy’s story is fascinating for many reasons, but especially because it involves two disappearances. He survived and thrived by making no reference to his African ancestry and presenting himself merely as Irish. There were some murmurs about his “indelicate blood”, but he relied on the obvious fact that an Irishman could not be black. But then he disappeared again – out of Irish-American history, a victim of the reverse assumption – that a black man could not be Irish. Only with the Civil Rights movement in the early 1960s was Healy rediscovered – as a black hero. You’ll find him, for example, in a popular book called African-American Heroes and Heroines . You won’t find him in most standard histories of Irish America.

And yet there are lots of people who look a bit like Barack Obama but are as much Irish-American as the obvious Micks he surrounds himself with, the Daleys and Donilons and Bidens. You find them in micro-histories of neighbourhoods rather than in the big narratives.

In the Lower East Side of Manhattan either side of the Famine, for example, Irish and blacks lived, worked and played cheek by jowl. You can catch glimpses in the records of the marriages and children that resulted: William Moore, a black labourer and his Irish wife Winifred, with their 12-year-old son and two-year-old daughter. John Baker, a black carter, and his Irish wife Julia. John DePoyster, a black labourer, and his spouse Bridget, sharing a house with John Francis, a black man from Virginia, and his wife Susan from Ireland. But all of the kids of these unions became “black” and their descendants became “African-American”. Irish America, as it came to be imagined, had no place for them.

Which brings us to yesterday’s Obama jamboree and the word that everyone preferred not to mention – race.

Did Obama come here because he desperately wanted to see Moneygall? No he didn’t. He came here because most white men don’t vote for him, because he’s the target of insidious racism and because being a little bit Irish helps to shore up his political defences. What’s all the “birther” madness but a badly coded suggestion that a black man can’t be truly “American”? What was that odious creep Donald Trump getting at when he wondered aloud how Obama got into Harvard?

There’s a toxic sludge of racism buried just beneath the surface of American political correctness. A day’s coverage of his Irishness was Obama’s clever, cool, non-confrontational way of messing with the racists’ heads.

This is perfectly fine with me – if it helps Obama undermine the bigoted headbangers, we should trace his ancestry back to Cúchulain and Queen Medb. But it does pose the question of what’s in it for us, beyond another visit from a political celebrity. It can be about one of two things – the usual slice of Paddywhackery or something that might make a bit of difference to the way we construct Irish identity in the future.

Claiming Obama can be just another exercise in pathetic Irish self-aggrandisement – another American president to add to “our” collection. This is nonsense – Obama’s chosen ethnic identity is that of an African-American. There’s something crass about any attempt to muscle in on that. But there is another way to claim Obama or rather to acknowledge what it means that he has some Irish heritage – to learn that “Irish” is not a racial category.

So who was the visit for? For Obama, of course, and I hope it did him some good. But more than that I hope it’s for the kids I saw the other morning, the sweat gleaming on their beautiful dark skin, one hand holding their daddy’s, the other balancing the hurleys they had over their shoulders.