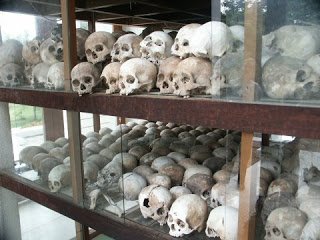 After so many false starts, it is gratifying to see that those responsible for the Cambodian genocide (the forgotten genocide) are finally facing justice. Justice may have been unduly delayed but hopefully, in this case it will be not denied entirely. It serves as a reminder to those rulers and warlords who kill, main and torture with impunity that in the new international human rights order, there will be no hiding place

The chief Khmer Rouge torturer went on trial for crimes against humanity on Tuesday, the first case involving a senior Pol Pot cadre three decades after the end of a regime blamed for 1.7 million deaths in Cambodia. Kaing Guek Eav, known as Duch and ex-commandant of the notorious S-21 prison, sat impassively in a blue shirt as a judge read the opening statements in court.

Hundreds of victims of Khmer Rouge atrocities lined up to get into court, but the proceedings are mostly procedural, with the main trial starting in March and a verdict due by September. Vann Nath, an artist, managed to get a seat near Duch. He was one of only a handful of people to survive S-21, saved because he was chosen to paint portraits of Khmer Rouge leader Pol Pot. “This is the day we have waited for 30 years. But I don’t know if it will end my suffering,” he told reporters during a break in the hearing.

Duch, now a born-again Christian, expressed remorse on the eve of his trial by the “Killing Fields” court set up to prosecute “those most responsible” for the 1975-79 reign of terror, one of the darkest chapters of the 20th century. “He said to the victims, ‘I ask your forgiveness, I ask your forgiveness’,” French lawyer Francois Roux told Reuters Television after visiting his client at a detention centre near the specially built court outside the Cambodian capital. The trial marks a turning point for the strife-torn country where nearly every family lost someone under the Khmer Rouge.