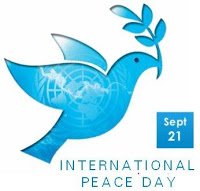 Please spare a moment to reflect on the how we can actively promote a culture of peace in our communities, our nations and our world.

Read my reflections in “The Mark” on the conflict in the Congo and why the international community must do more to find lasting peace. Also read the reflections of other on other conflicts – Afghanistan, Israel-Palestine, Aboriginal people in Australia and the Kurdish Question.

The war in the DRC officially ended in 2003. So why has the fighting not ceased?
To discuss the war in the Democratic Republic of Congo is to speak in superlatives. It is the widest interstate war in modern African history, drawing in at its height six countries and leaving an estimated four million people dead. It has been described as Africa’s World War and the world’s deadliest conflict since the end of the Second World War. Until recently, the United Nations peacekeeping mission in the country was the biggest UN operation in the world.
A resource-rich nation the size of Western Europe, the DR Congo has a long history of colonial repression, military dictatorship, and conflict. In the early 20th century, Belgian forces arrived and enslaved millions, while Belgium’s King Leopold ruled the country as his personal fiefdom. A painful struggle for independence that almost disintegrated the country was followed by the long and repressive reign of Joseph Mobutu, one of Africa’s most ruthless dictatorships.
The current conflict in the DR Congo is a legacy of this troubled history and centres on struggles for control of the nation’s vast reserves of diamonds, gold, copper, cobalt, and zinc. The stakes are high. What could easily have been one of Africa’s richest countries has suffered a devastating regional conflict involving several neighbouring countries and rebel factions. A UN report has accused all sides in the conflict of using the cover of the war to loot the country’s riches.
An agreement in 2003 between the warring parties marked the formal end of war and the establishment of a democratic transitional government. However, lasting peace has remained elusive. Former warring parties have been reluctant to give up power to a centralized and neutral national administration. The transitional government has been unable to fully assert political and military control over the vast country. The east of the country remains plagued by army and militia violence. People in the Congo are still dying at a rate of an estimated 45,000 per month, mainly from widespread disease and famine. The death toll as a result of violent military, militant, and insurgent actions was estimated at more than 1,000 in 2009.
A major threat to peace in the DR Congo has been the government’s tendency to sacrifice justice and accountability for political expediency. It has largely turned a blind eye to warlords absorbed into the army widely accused of carrying out atrocities and running their own personal militias. The government has also not vigorously pursued justice for victims of war. So long as the government condones warlord atrocities and doesn’t punish them, impunity will continue to threaten peace and stability in the country.
International apathy is another impediment to finding lasting peace in the DR Congo. Although the country currently has one of the largest UN peacekeeping missions, the conflict has never commanded the level of international attention that it deserves. Even at its height, the war rarely made news headlines. The UN’s peacekeeping mission has been in DR Congo for 10 years with a 20,000 personnel mandated to protect civilians and help in the reconstruction of the country. However, as the battles in the eastern part of the country have continued, the role of the UN forces has become increasingly murky. UN forces have been reluctant to intervene more actively to protect civilians from attacks. There have also been accusations of sex abuses and gold smuggling by peacekeepers.
The UN has now begun talks with the Congolese government to withdraw its peacekeeping mission by 2011 despite ongoing military operations in different parts of the country. The Congolese authorities have also been pushing for the withdrawal of UN peacekeepers. This does not portend well for the country. Given the fragile security situation, it is crucial to maintain the UN peacekeeping mission for the foreseeable future. There is real risk that the factionalized country may quickly slide back into violence amidst the political tensions of the presidential elections scheduled for late 2011.
What is urgently required is concerted pressure on both the Congolese government and the UN for a more constructive and engaged role for the international community. Such international engagement must go beyond peacekeeping to put in place mechanisms for sustainable peace building and transitional justice.