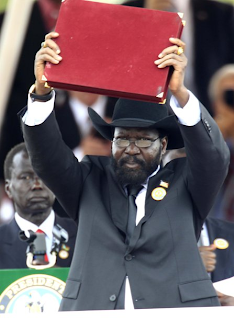 It was delightful to watch on TV, the celebrations that greeted the declaration of South Sudan as an independent nation – the world’s newest nation. Given the history of this troubled region and human suffering that has come with decades of civil conflict in which over a million people have died, the independence of South Sudan is a welcome development for the region. South Sudan becomes the 193rd country recognized by the UN and the 54th country in Africa.

The promise of a new society and the vision of peace and stability are palpable. The leaders of the country have worked to put in place the rudiments of a new nations – a new national flag; new national anthem, new currency and new political structures.
The people of South Sudan, many of whom have spent decades as refugees in neighboring countries, are returning home in droves in the hope that their new nation will provide them with the security and opportunities for decent livelihood that has long eluded them. I share in their hope and aspirations.
But it may not quite yet be complete “Uhuru” (Freedom). Amidst the hope, aspirations and celebrations are significant huddles that still confront the new nation. While some of these challenges are the unusual difficulties associated with forging news nations, some are unique obstacles. Here are what I consider the top four challenges confronting the new nation.

1. Managing citizen expectations and aspirations: We must not expect miracles. Given its history, progress in the new nation will likely be slow and painstaking. Years of war and neglect have ensured that the physical, social and institutional infrastructure in South Sudan are grossly inadequate. The new country joins the community of nations as one of the least developed in the world. Yet, for millions of South Sudanese, there are great hopes and expectations. These must be prudently managed. The leaders of South Sudan must strive to avoid the mistake of many post-colonial African leaders who promised their countrymen the sun, the moon and the stars after independence. The aspiration bar was set so unrealistically high that it was impossible to attain.

2. Managing the Oil Wealth: The new country is rich in oil which must also be prudently managed. First, the new government of President Salva Kiir Mayardit must work with Sudan (where most of the oil infrastructure are located) to come up with a revenue sharing agreement that is satisfactory to both sides. Next, oil revenue must be managed to serve the needs of the people rather than remain in the hands of a narrow oligarchy as is the case in some other oil-rich African countries.

3. Managing civil tensions and maintaining the Peace: The fragile peace that has allowed for the independence of South Sudan must be proactively maintained. Peace must be pursued both between South Sudan and her neighbors and within South Sudan. Recent reports of fighting in border areas between the north and south are troubling. There is real possibility of renewed conflict and for this reason the UN Security Council’s decision to keep in place the peacekeeping force for South Sudan is a wise one.

4. Negotiate Citizenship: A new law passed by the National Assembly in Khartoum has withdrawn Sudanese citizenship from all southerners. South Sudan is likely for reciprocate. This is bound to create more problems than it solves. Many South Sudanese have lived their whole lives in the north and vice versa. There must be a way to allow people on either side to feel a sense of national belonging, whatever side of the border that they choose to make their home. Citizenship must not become an instrument of ethnic exclusion and alienation.

An African proverb states: “A person is never blinded by a thrown stone that he can see coming.” Here is hoping that the people of Sothern Sudan and the international community see these “stones” and work toward avoiding them.