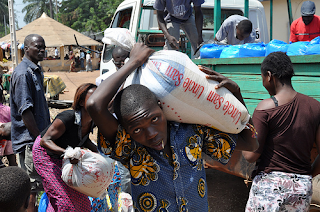 Here is an insightful commentary from the Students’ newspaper of USC, on the hypocrisy and double-standards that is becoming all too evident in the West’s approach to humanitarian intervention. As one of my colleagues put it recently, “History shows that the West is not intervening because Gadhafi is a brutal dictator, but because he is not our brutal dictator.”
Like the writer below, I support the humanitarian intervention in Libya. But why not in the Ivory Coast? Could it possibly be because Libya has oil and Ivory Cost has not? Ivory Coast is the world largest producer of cocoa, without which there will be no chocolates to satiate our sweet tooth. In a consumerist and fossil-fuel addicted word, oil is a much more precious resources. We can survive without chocolates for a which, but without oil…?
Apparently responding to this growing question, President Obama offered the following response in his March 28 speech on the Libyan Crisis
“It’s true that America cannot use our military wherever repression occurs. And given the costs and risks of intervention, we must always measure our interests against the need for action. But that cannot be an argument for never acting on behalf of what’s right. In this particular country, Libya, at this particular moment, we were faced with the prospect of violence on a horrific scale. We had a unique ability to stop that violence: an international mandate for action, a broad coalition prepared to join us, the support of Arab countries, and a plea for help from the Libyan people themselves…”
Obama may be right but he must also realize that the optics simply do not look good. American strategic interest cannot be the sole justification for humanitarian interventions. At some point these begin to look more and more like calculated strategic interventions and less like humanitarian Interventions. There should be a place for humanitarianism without strings attached.
———————————————————————-
Intervention In Libya, But Why Not Cote d’Ivoire?
Christine Detz | April 3, 2011
Associate News Editor
Neon Tommy
A bunch of Neon Tommy staffers sat around the office television last week watching President Barack Obama’s address to the nation about the U.S. role in Libya. Some of us were left wanting more as he outlined the mission and patted himself and the international community on the back for stepping in quickly to protect civilians.
One of my colleagues wanted the president to say “responsibility to protect.” We both knew he wouldn’t. If he had, it would mean a precedent had been set. The international community would now have to intervene wherever governments were knowingly and purposefully killing civilians. Places like Cote d’Ivoire (Ivory Coast) for example.
To be clear, I believe in the humanitarian intervention in Libya; I don’t believe in arming the rebels – that’s a whole different mission than protecting civilians. But why Libya? Why not Cote d’Ivoire?
It is unclear how many civilians have been killed since violence broke out in late November. The Red Cross reports between 800 and 1,000 civilians were killed in one town last week alone. The United Nations estimates more than 100,000 people have fled the country and up to 1 million people have been displaced internally.
The violence began after incumbent President Laurent Gbagbo lost his re-election bid to Alassane Ouattara. Gbagbo claims victory even though U.N. monitors declared the election fair and Ouattara the winner months ago.
The international community has known of the civilian casualties since the beginning. In a December 16, 2010 statement the Security Council said they were “deeply concerned about the violence, in particular against civilians in Côte d’Ivoire…. The members of the Security Council warn all stakeholders that they will be held accountable for attacks against civilians and will be brought to justice, in accordance with international law and international humanitarian law.”
These words ring hollow. Where is the sense of urgency to protect civilians in Cote d’Ivoire like we saw in Libya?
Sure, there is a U.N. peacekeeping mission in Cote d’Ivoire (it’s been there since 2004), but anyone who has studied peacekeeping mandates knows how limiting they actually are (remember Rwanda in 1994). The U.S. State Department called on the U.N. peacekeeping mission to “aggressively enforce its mandate to protect civilians” Sunday. An interesting choice of words considering a peacekeeping mission is usually anything but aggressive. U.N. peacekeepers have strict rules of engagement. In fact, if you read the Cote d’Ivoire mandate, protecting civilians in imminent danger is listed after protecting U.N. personnel, installations and equipment. That’s right, protecting equipment is more important than protecting civilians.
So again I ask, why Libya and not Cote d’Ivoire? The answer may be geography. Libya is only a few hundred miles from Italy and many refugees tried to flee to the European nation. Italy has some sway in the international community. The bulk of the refugees leaving Cote d’Ivoire are crossing into Liberia, which is not exactly a world power.
In his speech, President Obama reminded the world it took 10 weeks to establish a humanitarian intervention in the Balkans in the late 1990s and only three weeks to set up the no-fly zone in Libya. Well Mr. President, it has been at least 18 weeks since violence targeting civilians broke out in Cote d’Ivoire, how much longer are you and the international community going to make the Ivorians wait?