Home Arts Guy Fawkes: The Face of Anonymity and Defiance 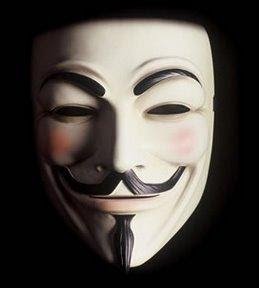 I have always wondered what the real story is behind the ubiquitous “V for Vendetta” mask that has become synonymous with the Occupy Wall Street protests in the US and around the world. The mask has come to represent the anonymity of an amorphous and leaderless grassroots movement. Apparently there is a fascinating history behind the mask.
The mask is a representation of Guy Fawkes who was part of a group of provincial English Catholics that planned a failed assassination attempt against King James I in 1605. Guy Fawkes who was in charge of the gunpowder that had been stockpiled to blow up Westminster palace was eventually captured, tortured and committed suicide before he was due to be executed. For centuries, Fawkes has been reviled for treason in Protestant England and his effigy is often burned on a bonfire.
It is a fascinating story. I find it ironic that the image of a man despised for treason at home has become a universal symbol of people power in the twenty first century. The Guardian of London provides and interesting expose on this iconic image.
http://www.guardian.co.uk/commentisfree/2011/nov/04/occupy-movement-guy-fawkes-mask

There are Two Sides to Corruption