Home Human Rights Dutch Apology for the Massacre at Rawagede (Indonesia): How not to do... 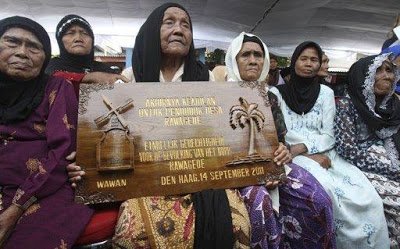 On December 9, 1947 Dutch military forces deployed in the village of Rawagede in colonized Indonesia committed an unspeakable crime.
In their fight to maintain Dutch colonial rule and suppress the Indonesian Republicans seeking independence for their country, they killed nearly all the males in this remote Indonesian village. Almost 500 men were rounded up and summarily executed, in many cases right before their families. The widows recall that it was left to the women and children in the villages to bury the corpses of their slain husbands, brothers and children. Rawagede became a village without men.
Although the Dutch army and state acknowledged that the massacres occurred, no one was ever prosecuted or convicted for the massacres. A 1948 United Nations report described the killings “deliberate and merciless.”
Since the publication of the report there have been pressures on Netherlands to officially apologize for the massacres and pay compensation to the victims and survivors. None has been forthcoming. The best that the people of Rawagede got was statement that the Netherlands “deeply regrets” the massacre.
Finally on the sixty-fourth anniversary of the massacres, the Dutch government through its ambassador to Indonesia formally apologised for the massacres. It was a terse public statement which included the words that the survivors had waited for over six decades to hear: “On behalf of the Dutch government, I apologise for the tragedy that took place in Rawagede on the 9th of December, 1947.”
But the apology came only after some survivors successfully sued the Dutch government for the massacres and a court in the Netherlands ordered the government to pay compensation over the killings. Only 9 relatives are still alive and each will receive a paltry Euro 20,000 ($27,000) compensation.
The apology is welcome since its better late than never. But for the traumatized people of Rawagede, it provides only cold comfort. The apology is too little too late. State apologies for historical crimes and injustices are notoriously difficult to get. In this case, the belated apology from the Netherland seems to have been driven more by insular legal and public relations considerations rather than a genuine sense of national contrition for the massacres. The Dutch apology is a classic example of how not to do state apology.
For more on the debate over state apology for historical crimes see a recent book to which I contributed:
Mark Gibney, Rhoda E. Howard-Hassmann, Jean-Marc Coicaud and Niklaus Steiner, eds., The Age of Apology: Facing up to the Past (Philadelphia, Pennsylvania University Press, 2008).

Truth and Reconciliation in Canada: Lessons from the South African TRC