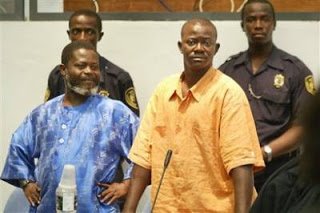 Like the proverbial gold fish, war criminals who engage in gross human rights violations with impunity will soon find there are no more hiding places for them on God’s earth. These are welcome development and one can only hope that the momentum is sustained.
Sierra Leone rebel leaders guilty of war crimes
By CLARENCE ROY-MACAULAY
FREETOWN, Sierra Leone (AP) – Feb 25, 2009
The rebels were known for asking their victims if they preferred “long sleeves” or “short sleeves.” They then cut off the hands of those who chose the first option and the full arm of those that picked the second. On Wednesday, an international court modeled after the Nuremberg tribunal convicted three top Sierra Leone rebel leaders of crimes against humanity — the closest thing to justice in this West African nation of amputees, orphans and widows.
Revolutionary United Front leader Issa Sesay and one of his battlefield commanders Morris Kallon were found guilty on 16 of 18 counts, including mutilation, terrorism, rape, forced marriage, sexual slavery and the enlistment of child soldiers. Another commander, Augustine Gbao, was found guilty on 14 of the 18 counts.

All three had pleaded not guilty and shook their heads as the verdict was read. About a half-million people were victims of killings, systematic mutilation and other atrocities during Sierra Leone’ 11-year civil war, which ended in 2002. Illicit diamond sales fueled the conflict, dramatized by the 2006 film “Blood Diamond,” starring Leonardo DiCaprio.

Rebels controlled the diamond fields and used the sale of the gem to buy guns. The rebels were allegedly trained and backed by Charles Taylor, the warlord of neighboring Liberia. For over a decade, the rebels roamed Sierra Leone’s jungles, raiding villages, vying for control of the nation’s diamond fields…..
Read more here….
http://www.google.com/hostednews/ap/article/ALeqM5iQKVQ9T1T6HyzXV4TWDS3HmLqirQD96ISC283