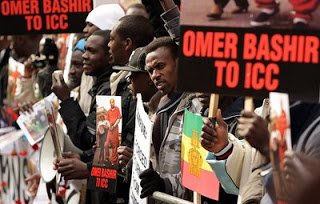 Sudan’s president Omar al-Bashir on has become the first sitting head of state to be charged with war crimes and crimes against humanity. The International Criminal Court (ICC) has issued arrest warrant for Sudan’s Bashir for a range of crimes, including the deliberate attempt to destroy ethnic groups deemed to be supporting rebel factions in Sudan’s troubled Darfur region.

“He is suspected of being criminally responsible … for intentionally directing attacks against an important part of the civilian population of Darfur, Sudan; murdering, exterminating, raping, torturing, and forcibly transferring large numbers of civilians, and pillaging their property.”
Although most observers have welcomed this decision, some have questioned whether this was the right decision to take under the circumstance and whether this was the right time to do so. A few have even raised the familiar and time worn concerns about neo-colonialism and cultural imperialism. Those concerns have their place and it is not here!
There can be no doubt that the indictment of President Bashir is a welcome development for the cause of human rights and social justice. True, the immediate consequence of the ICC’s indictment has been the expulsion of hundreds of NGO workers who provide important services to the people of Darfur blighted by years of war and government persecution. The impact will clearly be more hardship for these people. But even as we survey the immediate drawbacks, we must take a long term perspective.
The indictment of Sudan’s Bashir and the recent conviction of Sierra Leonean rebels for war crimes sends a clear and important message to dictators and warlords around the world. It marks a significant step in challenging authoritarian impunity and the wanton disregard for international human laws by political leaders. I agree with my friend Dr Paul Zelaza when he states:
“The indictment of President Omar al-Bashir and the issuance of a warrant of arrest by the ICC today marks an important milestone in the quest for justice for the people of Sudan as a whole, and not only the immediate victims of the violations in Darfur.”
In the days ahead, it will be interesting to see how the ICC and the international community follow up on this indictment. Will the international community bow to President Basirs’s show of bravado and or will they resolute and insistent on the cause of justice and human rights?
Read more….

Dr. Paul Zeleza, “The Indictment of the Sudanese President: Justice or Neo-colonialism?”
http://zeleza.com/blogging/u-s-affairs/indictment-sudanese-president-justice-or-neo-colonialism