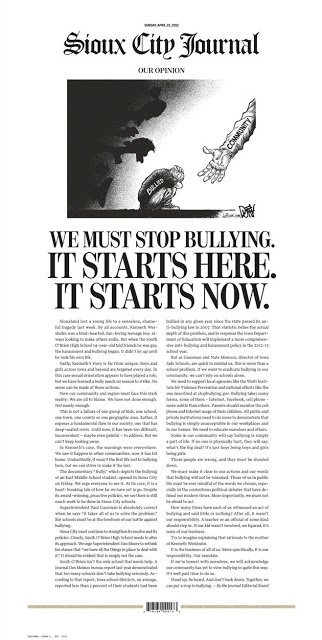 The spate of teenagers committing suicides because of bullying is troubling. As a parent and teacher I have struggled hard to find an explanation for this disturbing trend. Is bullying just getting more pervasive in our culture or are today’s kids less emotionally equipped to deal with bullying? I am not sure. But whatever the reason, there is need for concerted public efforts to draw attention to the devastating impact on bulling on children, their parents and society at large.

In a bold and forceful act of advocacy, a local newspaper in Iowa devoted the entire front page of its Sunday edition to an anti-bullying editorial after a gay teen in the community committed suicide. According to news reports, relatives say 14-year-old Kenneth Weishuhn Jr. suffered intense harassment, including threatening cellphone calls and nasty comments posted online, after coming out to family and friends about a month ago. He died April 15 from what the local sheriff’s office described only as a “self-inflicted injury.”

There simply has to be one united message on this — Bullying has no place in civilized society. Not in our schools, not in our homes and not in our workplaces.