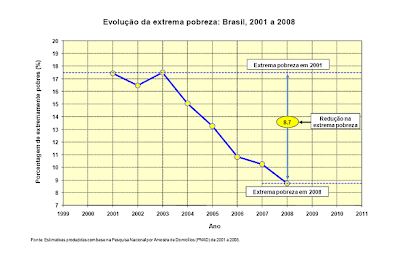 Still on my visit to Brazil…
One of the most intriguing discoveries I made during my stay in Brazil was finding out that the country has a ministry dedicated to the prevention of hunger. The ministry is called “The Ministry of Social Development and Fight Against Hunger (MDS).” As far as I know Brazil is the only country that has a cabinet level minister whose principal assignment is to fight against hunger.
The ministry was created in 2004 with a mission to promote social development and fight against hunger with the aim of “fostering inclusion and citizenship, ensuring food and nutritional security, a minimum citizenship income and integral assistance to families.” This mission statement reflects the country’s decision of placing the fight against hunger and social exclusion as a priority in the national agenda. My hosts tell me that the Ministry’s mandate is to ensure that all Brazilians irrespective of race, class or economic statues get three square meals a day. They call it the “Zero Hunger Program.”
According to the Ministry, its social policies are integrated in a system of social protection and promotion that currently benefits about 65 million people in situation of poverty, through its several programs, such as: the Bolsa Família Program of conditional cash transfer; the Continuous Cash Benefit (BPC), the Program of Acquisition of Food of the Small Landowner (PAA); the Cisterns Program; the Program of Integral Attention to the Family (PAIF); and the Program of the Eradication of Child Labor (PETI), among others.”
“By prioritizing social investments, Brazil has achieved significant results in reducing poverty and inequality, and has improved access to food, education, health and infrastructure services. Between 2003 and 2006, 14 million people escaped poverty, entailing a 31.4 per cent decline in the country’s poverty levels.”
The rest of the world is taking notice of Brazil’s fight against hunger. According to a 2009 ActionAid report, Brazil ranks first among developing countries in the fight against hunger. The report assessed 29 developing countries on the basis of legal commitment to the right to food, investment in agriculture and social protection, and performance on hunger and child nutrition. Brazil came in first, ahead of China, Ghana and Vietnam.