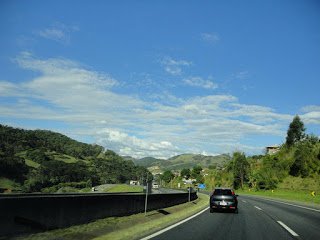 Still on my trip to Brazil…
While in Brazil I had the opportunity to attend the annual national academic conference of social scientists in the country. It was a gathering of the crème de la crème of the Brazilian academe.
The conference was held at a scenic resort-style hotel in the serene town of Caxambu in the western part of the country. It is a delightful and breathtaking city with green flowing hills and natural spring rivers. I was told that in the old days, the town was a holiday resort for kings and princes of the Brazilian monarchy who spent their vacations in the lush, calm and relaxing greenery of Caxambu. Given the beauty of Caxambu it is no wonder that the intellectuals of Brazil chose to continue the tradition.
One of the first things that struck me upon arriving at the conference venue was how unrepresentative the faces at the conference were of the Brazilians I had seen and met in the streets of Sao Paulo. This was a very “white” group with very few black, coloured or aboriginal faces. Not even in my years in Scandinavia did I encounter such a racially monolithic gathering at an academic conference. This was definitely not my image of Brazil. Where are the intellectual Peles, Ronaldinhos and Anderson Silvas that Brazil on the map in sport?
So, I asked Dr. Valter Silverio of the Federal University of Sao Carlos (one of the few “colored” faces at the conference) why the Brazilian intellectual community was so unrepresentative of the racial diversity of the larger society. Dr. Silverio should know. He is one of the key academics involved with studying and monitoring Brazil’s new affirmative action policy in the universities. He explained that although Brazil has always prided itself as being a racial democracy, racial inequalities are a historical reality. However, racial politics has not always resonated in the country as they have in the US.
As elsewhere in Latin America, the focus has historically been on class inequalities rather than racial inequities. However, in the past decade, the Brazilian government has taken decisive steps aimed at redressing the gaping racial and class imbalance in the educational sector with its affirmative action policies at the university level.
These policies, Dr. Silvero explains, have sometimes been controversial. But on the whole, they have set in motion the mechanisms for addressing lingering historical inequities in the country’s ivory towers. Brazil has chosen not to go with the race-essentializing American affirmative action model. Rather it has developed a uniquely Brazilian model that takes into consideration both race and class inequalities in the country.
For me, it is another example of a country’s unique and creative approach to addressing its social challenges.

Seasons Greetings and Best wishes for just and peaceful 2012