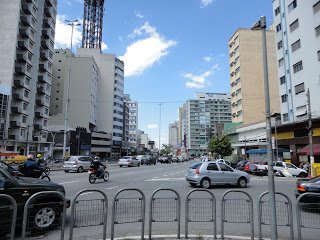 For the past two weeks I have been in Sao Paulo, Brazil as a guest speaker of the “Centromere de Estudo de Cultura Contemporanea” (Centre for the study of contemporary culture). It is my first time in Brazil and I must say that it has been a revelation. In the next few weeks I will be blogging about my random observations of Brazilian society and culture.
Before vising Brazil, I had heard a lot about the social and political changes initiated by the government of Luiz Inácio Lula da Silva but visiting the country gives one a real sense of the impact of these changes.
Lula’s policies have been credited with creating the conditions for the greatest reduction of the number of people living in poverty in the recent history of Latin America. Brazil is doing in Latin America what China is doing in Asia. With more people moving up the social ladder and with more purchasing power, the Brazilian economy is booming even at a time of global recession. Evidence of the resurgence of capitalist consumerist culture can be seen everywhere from the new city metro line systems to the sprawling American style malls springing up across the city.
The interesting thing about the Brazilian development model as I see it is that the triumph of the capitalist consumerist property model has not been allowed to run a mock as has been the case elsewhere. Great care has been taken to put in place social safety nets to ensure the rights and welfare of the poorest and most vulnerable in the society are protected. Call it capitalism with a conscience.
I ask my host, Dr. Rosanna Reiss of the University of Sao Paulo which of the government’s many social policies she thinks has had the most profound impact on Brazilian society. “Clearly the Bolsa Família program” She says. The Bolsa Família is the $150 cash transfer to poor families throughout brazil. ” These cash subventions have transfomed the lives of many ordinary people across the country.” They enable the poorest families to invest in education and gain financial security.
When the grants were first proposed, there was the familiar concern that it would lead to the “indolence and dependency of the poor on the nanny state.” However, documented evidence shows the contrary. The funds have had an empowering effect of the country’s poorest. My hosts tell me of anecdotal evidence of Bolsa Família program recipients requesting government agencies to discontinue payments to them when their economic situation improve. This challenges the arguments that state welfare programs inevitably foster dependency among the poor.
A true test of the humanity of any society is how well it treats the least of its members. Brazil provides an alternate development model for Latin America and the rest of the developing world. The problem as the Brazilian example shows is not necessarily free market capitalism but the virulent form of avaricious corporate capitalism that currently dominates the global political economy. There is, I think, a place for conscientious and regulated free-market economics that seeks as its goal, not only the unending accumulation of economic surpluses in ever fewer hands, but rather doing the greatest good to the greatest number of people while providing safety nets for the most vulnerable in the society.

John Humphrey: The man behind the UDHR

Book of the Week: John Foran, Taking Power: On the Origins...