Home Politics Book of the Week: John Foran, Taking Power: On the Origins of... 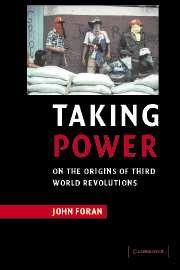 I just finished reading John Foran’s new book, Taking Power (2005) and I think is a must read for anyone interested in human rights, social justice and peace. Although Foran is a sociologist and brings a predominantly sociological approach to his analysis, he also offers a multidisciplinary perspective.

He seeks answers to a simple age-old question: Why do revolutions happen? Focusing on a diverse range of revolutionary episodes – China, Cuba, Iran, Mexico, Nicaragua, Angola etc – Foran argues that five inter-related causal factors must combine in a given conjecture to produce successful social revolutions – 1) dependent development; 2) repressive, exclusionary, personalist state; 3) elaboration of effective and powerful political culture; 4) crisis arising from economic downturn and 5) a world systemic opening (external factors).
While I do not agree with some of the more rigidly structuralist arguments that Foran makes, I think his overall attempts at systematizing our understanding of social revolutions is to be commended. I was particularly intrigued by his discussion on the “Future of revolutions.” He questions whether Globalization represents the “Highest Stage of Capitalism?” (p.260)
Globalization the Highest Stage of Capitalism?
In his classic 1916 account of imperialism, Lenin conceived it as the highest stage of capitalism, and dated its rise in words that echo eerily almost a century later: “The beginning of the twentieth century marks the turning point from the old capitalism to the new, from domination of capital in general to the domination of finance capital.” Foran wonders if, as imperialism represented for Lenin a special state in capitalism, globalization at the beginning of the twenty-first century represents a special stage in imperialism and neo-colonialism. This, I think, is an interesting proposition that draws attention to the structural inequities inherent in contemporary globalization.