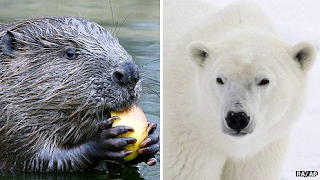 This lighthearted story about the debate over replacing the beaver with the polar bear as Canada’s national emblem was one of the most read stories on the BBC website this week.

Apparently the rest of the world is as concerned as some of us about the efforts currently been pushed on several levels to reshape Canadian national identity. Canada’s unilateral decision to withdraw from the Kyoto Protocol marks a radical departure from the values of moderation and tolerance that the country has long been known for. These values are part of the reasons why some of us, chose to make this country home. It is a source of grave concern that these values seem to be slipping away.

“In a world of eagles, bears, dragons and other fearsome beasts, surely we need more, not less, of the beaver.”