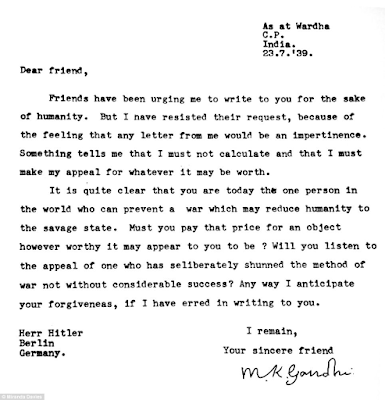 Amidst the rise of Nazism in Germany in 1939 and Hitler’s aggressive militarization that foreshadowed the Second World War, Mahatma Gandhi, the pacifist leader of the non-violent movement against British rule in India wrote a letter to Adolf Hitler. It was a short and simple letter, just 12 lines; 126 words in all.
Dear Friend, Friends have been urging me to write to you for the sake of humanity. But I have resisted their request, because of the feeling that any letter from me would be an impertinence. Something tells me that I must not calculate and that I must make my appeal for whatever it may be worth. It is quite clear that you are today the one person in the world who can prevent a war which may reduce humanity to the savage state. Must you pay the price for an object however worthy it may appear to you to be? Will you listen to the appeal of one who has deliberately shunned the method of war, not without considerable success? Any way, I anticipate your forgiveness, if I have erred in writing to you. I remain, Your sincere friend, – Signed – M.K.Gandhi
Later in December 1940 with the outbreak of war, Gandhi sent another slightly longer letter to Hitler. In it, he once again urged Hitler to heed the appeals for peace coming from millions of voices around the world.
He stated: “We have no doubt about your bravery or devotion to your fatherland, nor do we believe that you are the monster described by your opponents. But your own writings and pronouncements and those of your friends and admirers leave no room for doubt that many of your acts are monstrous and unbecoming of human dignity… Such are your humiliation of Czechoslovakia, the rape of Poland and the swallowing of Denmark. I am aware that your view of life regards such spoliations as virtuous acts. But we have been taught from childhood to regard them as acts degrading humanity. Hence we cannot possibly wish success to your arms.”
Gandhi went on in the letter to explain the philosophy behind his non-violent resistance to British rule in India stating, “We have found in non-violence a force which, if organized, can without doubt match itself against a combination of all the most violent forces in the world.”
Gandhi never received an acknowledgement or reply from Hitler and it is unclear today whether his letters even reached Hitler. Some historians of the period have speculated that senior Nazi officials would have found the letter imprudent and might have been unwilling to pass it on the Fuhrer. Others theorize that Hitler would have been highly offended by Gandhi’s letters and not taken them seriously. Hitler proceeded with his war. World War II would turn out to be the deadliest military conflict in history with over 60 million people killed.
Students and scholars of peace have long asked: Was Gandhi naïve? Did he really expect this letters to have an impact on Nazism or Hitler’s vision of the Third Reich? Were his letters to Hitler a waste of time? Did they amount to appeasement as some have suggested?
Hindsight, they say, is 20/20 and half a century later, it is easy to speculate as to what should have been the right course of action. True, Gandhi’s letters were ineffectual. But were they a waste of time? I think not.
As a leading moral voice of his era, Gandhi felt an obligation to his conscience and the world, to make an appeal for peace irrespective of the odds of success. Ultimately, peacemaking is about pragmatic risk-taking and Gandhi took his risks for the sake of peace. Given the unspeakable horror and brutality of terrorism and war that afflicts many countries today, our world is in depsrate need of a new generation of risk takers for peace.