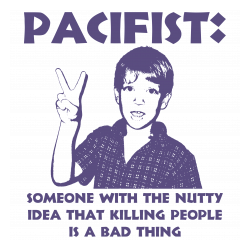 I have been thinking a lot about pacifism lately. In the decades since the anti-war peace movements of the 1960s and 70s, peacemaking has come to be seen as synonymous with absolute pacifism or what some describe as anarchic pacifism. Absolute pacism is the opposition to violence under any circumstance even in defense of self and others. For religious and moral reasons there will always be those who subscribe to absolute pacifism and oppose any form of violence; those who believe that war should never be conducted, even in the justified pursuit of peace. For the absolute pacifists, there can be no moral grounds which can justify resorting to war.

For the absolute pacifists who subscribes to the unconditional rejection of all forms of warfare, there are no just wars; all wars are unjust. This moral position will continue to have a place even in a dangerously conflicted world. When people think about peace movements, they invariably think about absolute pacifists and it becomes easy to dismiss the movement as idealist and utopian, even irrational, offering no real world solutions.

But pacifism covers a spectrum of views. At its most basic level, pacifism is the opposition to war and violence. In a complex and conflicted world such as ours, strategies for peacemaking need not be limited to absolute pacifism. There is a place for pragmatic pacifism.

Many of today’s pacifists are what can be described a pragmatic pacifists who subscribe to Just War theory. Pragmatic pacifists believe that domestic and international disputes can and should be resolved peacefully. If institutions of the military and instruments war must be used, they should be used as a last resort and only in defense of self and others. They reject the use of physical violence to obtain political, economic or social goals.

The pragmatic pacifist believes that if the foe is willing to egregiously hurt others, then it is justified to respond with force. True, some believe that those who subscribe to any use of force are really not pacifists at all, but that is a matter for debate.

I would suggest that peacemaking in today’s conflicted world requires a pragmatic pacifism. Within pragmatic pacifism there is room for humanitarian intervention. The foundational premise of the post-Second World war universal human rights regime, drawn from the lessons of the Holocaust, is that we can no longer allow the excuse of state sovereignty to be used to justify gross human rights violations.

No longer can oppressive dictatorships be allowed to massacre their citizens on the perverted argument that posits: “These are our own people, we can do with then whatever we want.” Universal human rights is the right to meddle in the business of other nations. Backed by the provisions of the UN Charter, the Universal Declaration of Human Rights and the emerging doctrine of the Responsibility to Protect (R2P), the international community now has an obligation and the legal framework to intervene to protect victims of gross human rights violations wherever they may be.

Within these international legal frameworks, UN Peacekeeping missions involved in humanitarian interventions in conflict situations have the mandate to stop hostilities, protect civilians, restore order and enforce peace. Only when law, order and security are restored (sometimes through the use of force) can peacebuilding initiatives be put in place.

It is true that the principle of humanitarian intervention can and has been politicized, sometimes used as an pretext in big power politics to undermine the sovereignty and territorial integrity of less powerful states. But we have also seen military humanitarian intervention put to good use such as the case of NATO intervention in Kosovo and Bosnia Herzegovina in the late 1990s which stopped ethnic cleansing and an impeding genocide.

One of the great tragedies of the Rwandan Genocide was that Roméo Dallaire, the Canadian General who led the UN peacekeeping force in that country on the eve of the genocide could not convince his superiors at the UN secretariat to change the mandate of the force to allow for active military intervention to stop the genocide.

In his compelling and poignant [poin-yant] account of the Genocide, Shake Hands with the Devil, Dellaire points out that it was clear to him and his colleagues in the UN Peacekeeping force that Hutu extremists were making elaborate plans to massacre Tutsi civilians. Prompt and decisive intervention by the international community, some of simple as jamming radios stations broadcasting hate propaganda, may have prevented the genocide and saved thousands of lives. But in that case, as in the Cambodian Genocide two decades earlier, the apathy and indecisiveness of the international community allowed the massacre of a million people.

What are the guarantees that pragmatic pacifism can provide the solutions to conflict in our deeply divided world? Simply, there are no guarantees. But what are the alternatives to peace? The appeal of pragmatic pacifism is that it recognizes that just wars may sometimes be waged in self-defense or the pursuit of peace, and it yet offers the hope of avoiding the scourge and devastation of war.

The US President Ronald Regan, more pragmatist than pacifist himself, faced similar questions when he initiated nuclear disarmament talks with the Soviet Union in the1980s. He was confronted by critics and sceptics who worried that the Soviets could not be trusted to keep their own end of the agreements, and warned that disarmament talks would undermine US security and strategic geopolitical interest. In response, Reagan famously stated: “Peace is not the absence of conflict. It is the ability to cope with conflict by peaceful means.” Despite the gloomy predictions of the skeptics, Reagan pushed on with the nuclear disarmament talks, setting the tone for de-escalating US-Soviet tensions and ultimately, ending the Cold War.

It is ironic that a bi-polar Cold War world of superpowers, nuclear proliferation and the threat of mutually assured destruction now seem more stable than a fragmented unipolar world. The end of the Cold War was expected to usher an era of unmitigated world peace.

This clearly has not happened. Angry voices of war and fear have drowned out the voices of hope and peace.

Our conflicted world needs more voices of peace, now more than ever before.

Cultural Relativism and Human Rights: Are human rights only in the...