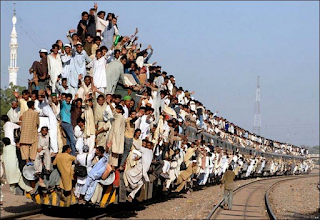 Something in the news caught my eye this week. The United Nations reported that the World population hit 7 billion this year and would hit 10 billion by 2100. That’s a lot of people!
At 7 billion, the world’s population has tripled from what it was in 1930. In just 90 years, we will have 50 per cent more people on this planet than we did at the beginning of the century, competing for the same food, water, space and attention.
Whether we like it or not, we will all have to learn to share, compromise and negotiate to survive as more and more people compete for limited resources. The waste, profligacy, over consumption and gaping inequalities of our world are simply unsustainable. The problem is not so much the lack of resources. There is more than enough in this world to meet everyone’s basic needs but not everyone’s greed.
To wage peace, we have to first wage war. But not the kind on war on each other that we have become accustomed to. We have to wage war on the injustice, inequities and dispossession that are often at the roots of conflict and violence. We now have 7 billion urgent reasons to do so.