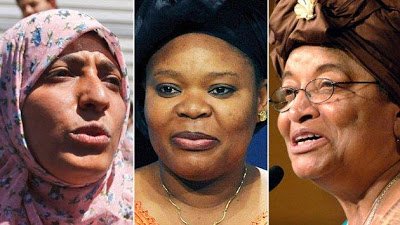 In awarding the 2011 Nobel Peace Prize to these outstanding women, the Nobel Prize Committee has accorded long overdue recognition to the role of women as peacemakers.
I am one of those who strongly believe that women are crucial to bringing peace and justice to our troubled world. Women are often the most affected by conflict and injustice– they are victims of abuse and rape; they bear the burdens when husbands and chidden are lost to war. For them the cost of war and conflict are painfully real. It is no wonder therefore that women are key to sustainable peacebuilding.
This year’s Nobel Peace Prize winners prove this.
Apart from being Africa’s first elected female head of state, Liberian President Ellen Johnson Sirleaf has worked to bring peace and stability to Liberia’s war ravaged society. In a continent were patriarchy rules supreme she serves as a role model for millions of African women. She has pursued policies aimed at empowering women, children and the most vulnerable in her country.
Liberian peace activist Leymah Gbowee has “mobilised and organised women across ethnic and religious dividing lines to bring an end to the long war in Liberia, and to ensure women’s participation in elections. She has worked to enhance the influence of women in West Africa during and after war.” She organized a group of Liberian woman in 2002 to put pressure on the warring parties to end the country’s brutal civil war. “They were the mothers, wives and sisters of the men doing the fighting and their victims.”
Yemeni journalist and activist Tawakul Karman, founded Women Journalists Without Chains in 2005. In a country notorious for political repression and state sanctioned human rights violations, she has been a voice and advocate for human rights and freedom of expression. Defying traditional restrictions on women in Yemen’s conservative political space, Ms Karman has led rallies in the continuing protests against the rule of President Ali-Abdullah Saleh. She has done all this without repudiating the basic social and cultural values of her society.
These women are models of resilience and commitment to the course of peace and human rights.
Congratulations Ladies.

The Poverty of Illiteracy