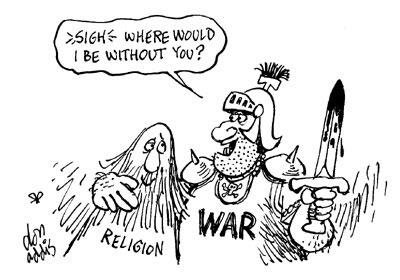 Religion has historically been a key source of human rights violations. From the medieval battles of the Christian Crusades to contemporary Islamic fundamentalism, religion has often been invoked in ways that cause pain and suffering to others. However, religion can also be an effective means of promoting human rights and peace in our world. Think about it! Every region I know has something positive to say about human rights. We just have chosen not to pay attention.

Hinduism: Hindu tradition teaches non-harm of the self, others and the earth and offers passive constraints on recourse to violence. Idea of Ahmisa “non injury” or the absence of a desire to harm is a central tenet of Hindu ethics.

Confucianism: One of the five Confucian virtues is “Jen” (human-heartedness) which is described by Confucius as the principle “to love all men.”

Even though it was patriarchal and hierarchical, classical Confucianism did hold the view that all people have the capacity to become flourishing moral persons in the community, if not exemplary sages. This view comes close to maintaining a position of moral equality even within social hierarchy, at least with respect to people’s moral potential.

“Do not hate your brother in your heart. Rebuke your neighbour frankly so you will not share in his guilt. Do not seek revenge or bear a grudge against one of your people, but love your neighbour as yourself.” — Leviticus 19:17-18

“Do not pervert justice; do not show partiality to the poor or favouritism to the great, but judge your neighbour fairly.” –Leviticus 19:15.

Judaism teaches that the individual has the right not only to life, but to security from harm, to health, dignity and making a living – all specific factors involved in assessing costs in cases of damages (Bava Kama, Mishnah 2:6).

“Oh mankind, we have created you from a single pair of male and female and made you into nations and tribes that ye may know each other, not that you may despise each other.” — Koran, Surah 49:13.

The Paradox of Democracy in Aung San Suu Kyi’s Myanmar